Ask any celebrity why they prefer New York to Los Angeles, and they’ll tell you, it’s the blasé attitude of the city’s residents. New Yorkers have grown accustomed to standing in line at the coffee shop with Sarah Jessica Parker, and they’re not likely to kick up a fuss if they spot De Niro in Tribeca. However, there are a handful of public figures who will elicit a reaction from even the most sanguine New Yorkers. Carmelo Anthony falls into that category. In a city that lives and dies by its sports teams, the Knicks forward has become a legend. His record with the basketball team speaks for itself; this year alone, Anthony set a record for both the Knicks and Madison Square Garden when he scored a career-high 62 points in one game against the Charlotte Bobcats. Standing at 6’ 8”, the 29-year-old basketballer certainly makes an impression. At the photoshoot for his cover story, even the largest timepieces looked small in Anthony’s hands.

A founding partner of Haute Time, Anthony further cemented his status in the watch world when he became a friend of the brand IWC Schaffhausen last year. Anthony’s personal collection of watches includes some of IWC’s most outstanding creations, including the Big Pilot Edition Muhammad Ali, the Aquatimer Chronograph Edition “50 Years Science for Galapagos” that debuted at SIHH 2014, and a rare Portuguese Tourbillon Mystère Squelette, his first tourbillon. Spotting the Portuguese Tourbillon Mystère Squelette on Haute Time’s Instagram, Anthony says it was love at first sight.

“There was only one of these in the United States,” Anthony said. “This is just something that I had to have in my possession. You can see the complication and mechanics that go into putting this watch together. For me, this is something that when it comes to fine watch making, is an essential piece. Of all my watches, I will say this is maybe my best one.” 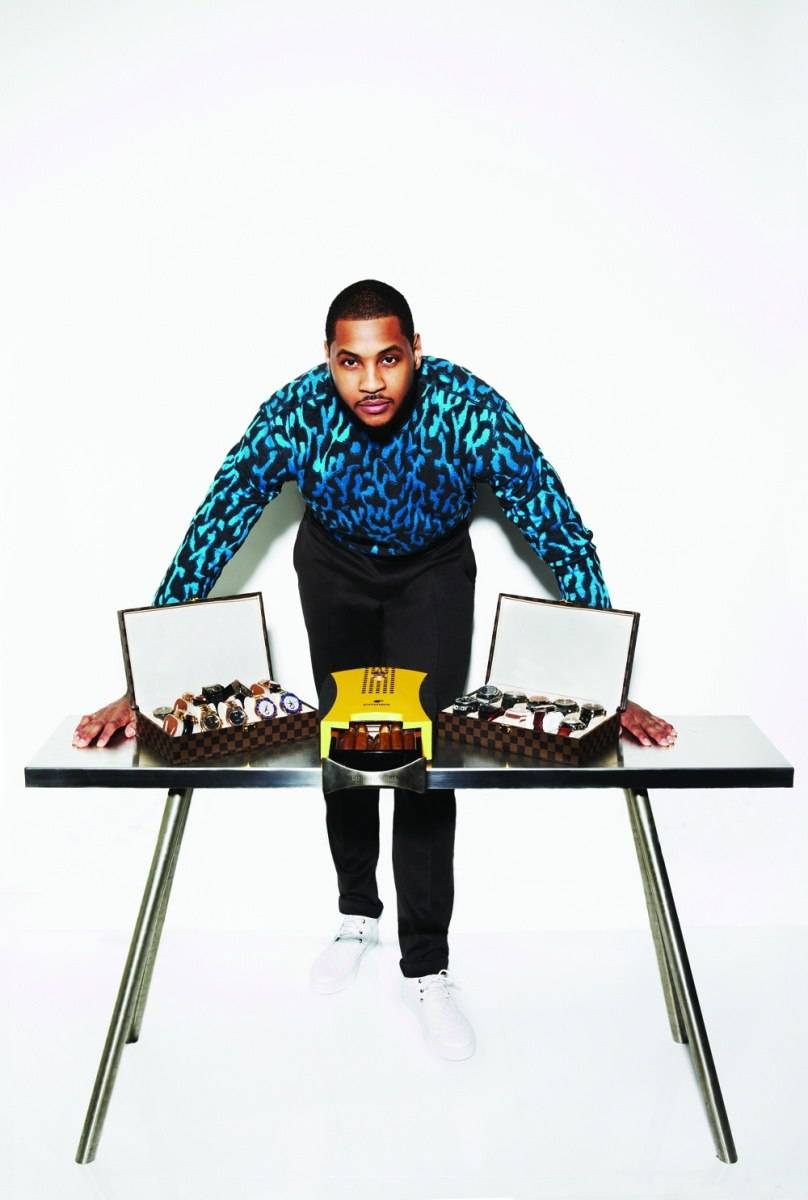 Long before he started his Watch of the Day feature on Haute Time and signed with IWC, Anthony admits that he was an haute horlogerie novice. When Anthony was drafted into the NBA in 2003, just one season into his college basketball career at Syracuse University, he was gifted with an A. Lange & Söhne watch. “It was a dope looking watch,” Anthony said. “For them to gift me a watch at that time – I wasn’t collecting anything. If somebody gave me a watch, I was on it – it was free! I wore it a couple of times, and people would ask me where I got it. But then years later – because at the time I wasn’t really educated on the history behind A. Lange & Söhne – once I got the history, I was like, ‘Where the hell’s that watch at?’ That could have been a classic.”

These days, Anthony’s knowledge of the watch world could rival that of most industry insiders, but he is candid about the journey of self-education that led him here. “Being around different people, listening, observing, seeing what’s on their wrist. When you’re at this caliber and level in your life, people look at you like you’re supposed to look like what you’re worth, but I’ve met billionaires and CEOs of companies who look like they’re just everyday people. I would look at their wrist, and I’m wondering why they don’t have the diamond watches and things like that,” Anthony said. “But when I asked them, it turned out their watches cost more than anything out there. It’s a $300,000 – $400,000 watch these guys are wearing, but you would never know it just by looking at them. I had to look, to observe, to listen. As I learned about the movements and the sophistication of it, I started to appreciate the art of watchmaking. It’s night and day now.”

One thing’s for certain: Anthony has had plenty of reasons to celebrate since he received that first A. Lange & Söhne, and he has commemorated those occasions with some serious timepieces. “One of the Rolex watches, I think it was the Oyster Perpetual Yacht-Master II that was one of my first purchases. Then from there – as you can see – I just went crazy,” Anthony said with a laugh. In addition to his IWC pieces, Anthony’s collection includes; an RM 035 Rafael Nadal and an RM 011 Flyback Chronograph by Richard Mille; a Big Bang Ferrari, a King Power Unico Titanium and a diamond-clad King Power Oceangraphic 4000 by Hublot; a Marine Royale 5847BR by Breguet; a black and orange Royal Oak Offshore Chronograph (“playing off the Knicks colors a little bit”), a Royal Oak Offshore Chronograph Michael Schumacher and a Royal Oak Dual Time by Audemars Piguet. When Anthony signed with Nike’s Michael Jordan brand, he received his first Patek Philippe. He now has several Patek Philippe Nautilus 5980 models, including one in stainless steel with bracelet, one in rose gold with bracelet, and one in rose gold with a leather strap.

Whether it’s basketball or timepieces, Anthony does nothing in half measures. Since the debut of Carmelo Anthony’s Haute Time Watch of the Day, his feature has become a sensation. “Everywhere I go people just want to know what’s the Melo watch of the day, what I have on my wrist. Sometimes I get upset with myself when I don’t have a watch on, because that’s when people come up to me and say, ‘Melo where’s your watch? What are you wearing today? Why don’t you have a watch on today?’” Anthony said with a wry smile.

The popularity of his feature speaks not only to Anthony’s charisma but also to his business savvy. Whether it’s Haute Time or Michael Jordan’s Nike brand, Anthony has eschewed staid endorsements in favor of true partnerships. That approach has led to collaborations with 50 Cent’s SMS Audio, PowerCoco, Foot Locker, Mission Athletecare and Isotonix. While his position on Forbes magazine’s list of the world’s highest- paid athletes is well documented, less well known is Anthony’s philanthropic work. To hear him speak, Anthony’s appearances on The Giving Back Fund’s annual list of the top celebrity donors far eclipses the importance of his $28 million empire. Since 2005, Anthony has funded education, recreation and outreach in underprivileged communities through the Carmelo Anthony Foundation.

The list of the foundation’s accomplishments is lengthy; it includes donating $3 million (the largest single contribution) for the creation of the Carmelo K. Anthony Center, a $20 million training facility and court on the campus of Anthony’s alma mater Syracuse University; the building of the Carmelo Anthony Youth Development Center in his hometown of Baltimore, Maryland; the creation of Courts 4 Kids, which refurbishes basketball courts; the donation of school supplies through Tools for Teachers; A Very Melo Giveback, which provides families in need with food and supplies during the holidays; and A Very Melo Xmas, where students who have made a difference in their school or community get the chance to spend the day with Anthony.

Beyond his community involvement in Baltimore, Syracuse and New York, Anthony has also made significant donations in Puerto Rico through A Very Melo Weekend. The program is a tribute to his late father, who passed away from cancer when Anthony was just two. Having missed the chance to get to know his father, who was from Puerto Rico, Anthony decided to find a meaningful way to reconnect with his roots. The weekend includes a dinner party, golf invitational, celebrity softball game and the unveiling of a newly refurbished court. According to Anthony, this year’s event will be the biggest fundraiser in his foundation’s history. 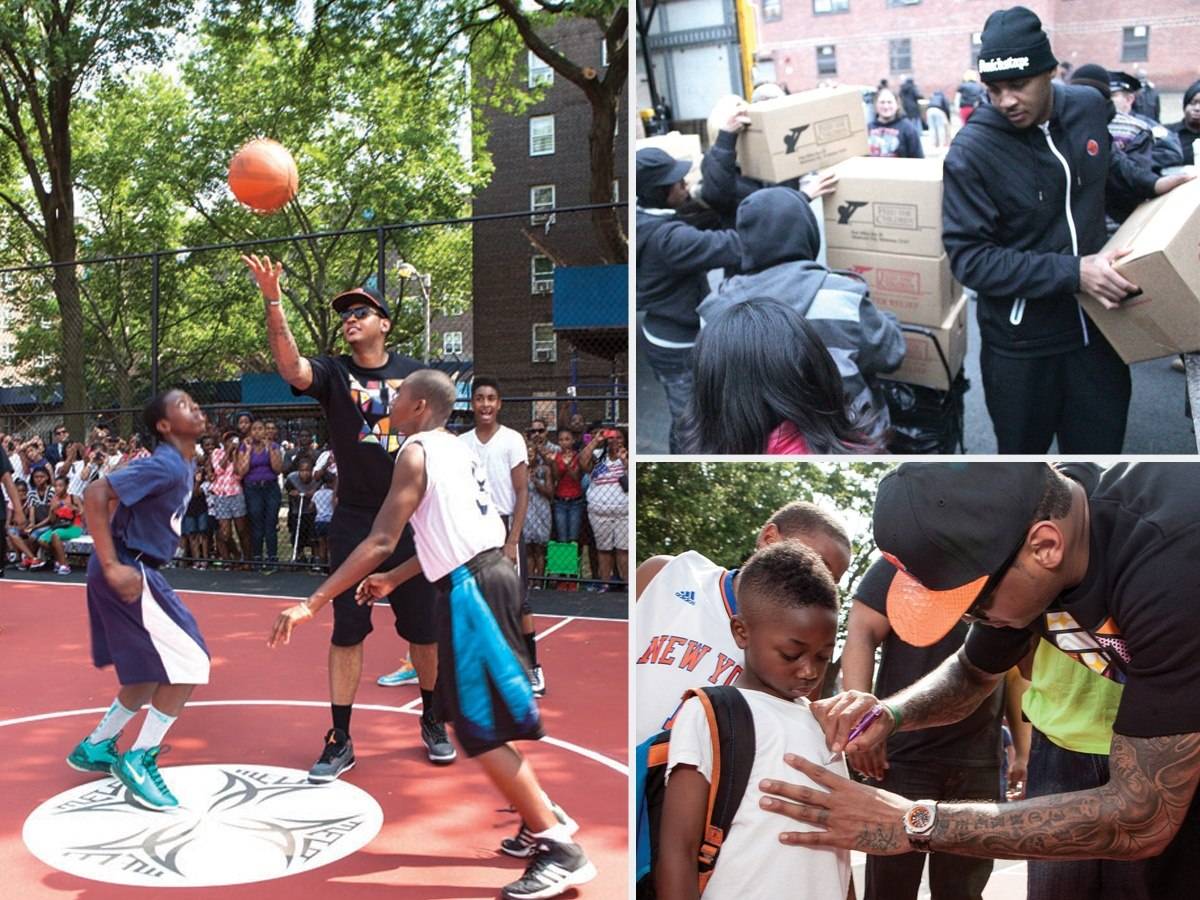 Starting out, from high school to college to the pros, you grow year in and year out. You get better, you get more mature, you get wiser, and you get smarter,” Anthony said. It’s an incredibly humble way for Anthony to describe his incredible trajectory, whether it’s his career in the NBA, his ever-growing empire, his philanthropy, or even his taste in watches.

“Haute Time is about time,” Anthony concluded. “Time is money, and money never sleeps. Time is harsh. I’m just happy that I can be a part of it and spread that love, spread my knowledge, just make people understand and give them an education about wearing watches, about great timepieces.”