The Urwerk Work: 20 Years Of Innovation Put The ‘Work’ In “Urwerk’

If you’ve heard of a wave of watchmakers who represent the nouvelle horlogerie, then you certainly know Urwerk, the Swiss company founded by watchmaker Felix Baumgartner and designer Martin Frei. If it still doesn’t ring a bell, perhaps you’ve heard of Iron Man and Robert Downey Jr.? The actor and his big screen character walk red carpets and save the planet with an Urwerk on the wrist. This independent brand, celebrating its 20thbirthday, never aimed for scale—it proudly produces just 150 watches per year. But you can count on Urwerk for achieving greatness as recognized by the jury of the Grand Prix d’Horlogerie, and for turning the telling of time on its head. These otherworldly timepieces from Urwerk are available at Westime’s boutiques in California and Florida. 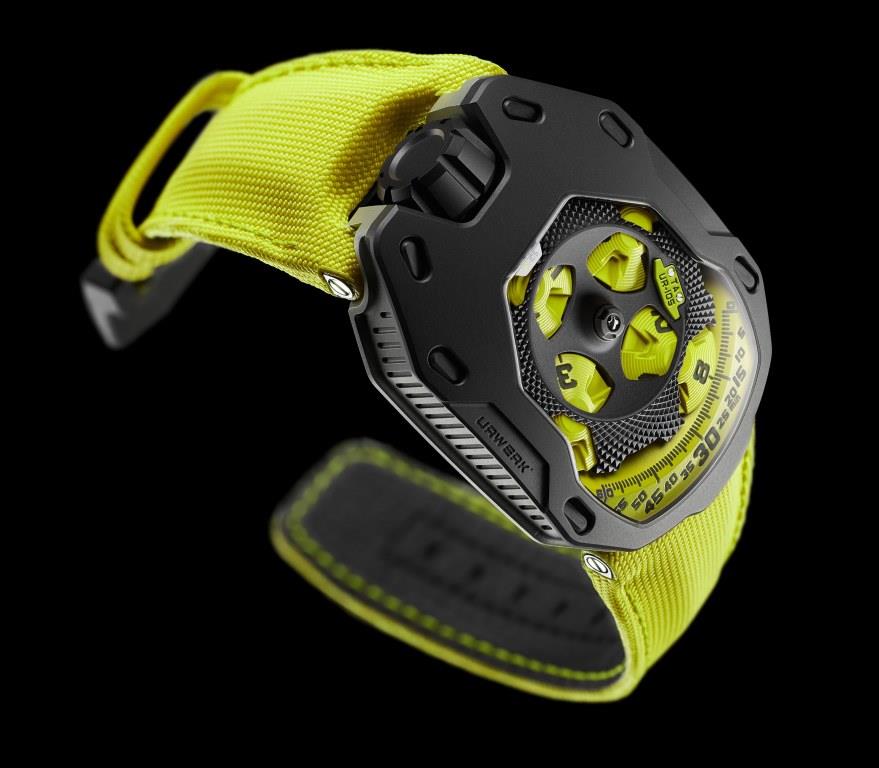 UR-105
From its inception, a system of rotating and revolving satellites to indicate the time has been Urwerk’s emblematic signature element. The newest editions of the UR-105, in orange and lemon, give unimpeded visibility to the carousel of satellites. Four discs, each displaying three hour-numerals, reveal themselves as they glide past the minute rail to display the time. They are powered by an automatic movement that has three settings for the user to choose: full, to allow small movements to wind the hairspring; reduced, for moderated winding; and stop, which disables the automatic winding system and makes the watch a hand-wound timepiece. 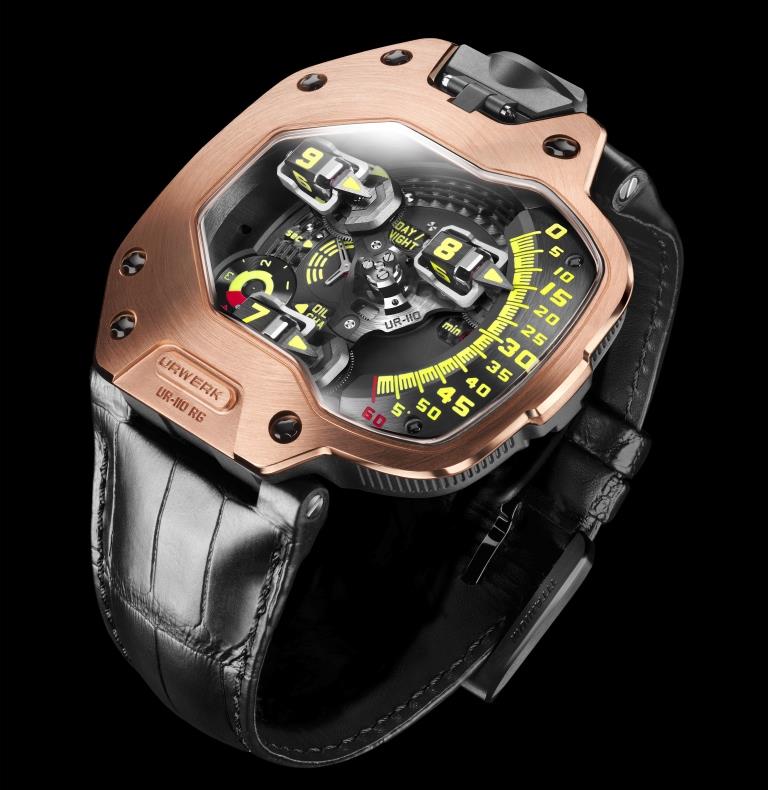 UR-110
A true gentleman wouldn’t want to offend his present company by hiking back his sleeve to check the time on his watch. So obvious! The UR-110 offers a brilliant solution, one that Iron Man alter-ego Tony Stark appreciates. The time is always shown on the right side of the asymmetrical watch, again via a family of satellites that glide along an hour track. The award-winning design also incorporates an “oil change” indicator to alert the user it is time for service, and a day/night indicator. Whether encased in titanium, platinum or red gold, the unique automatic movement allows the wearer to view the time discreetly as it peeks out from under a cuff. 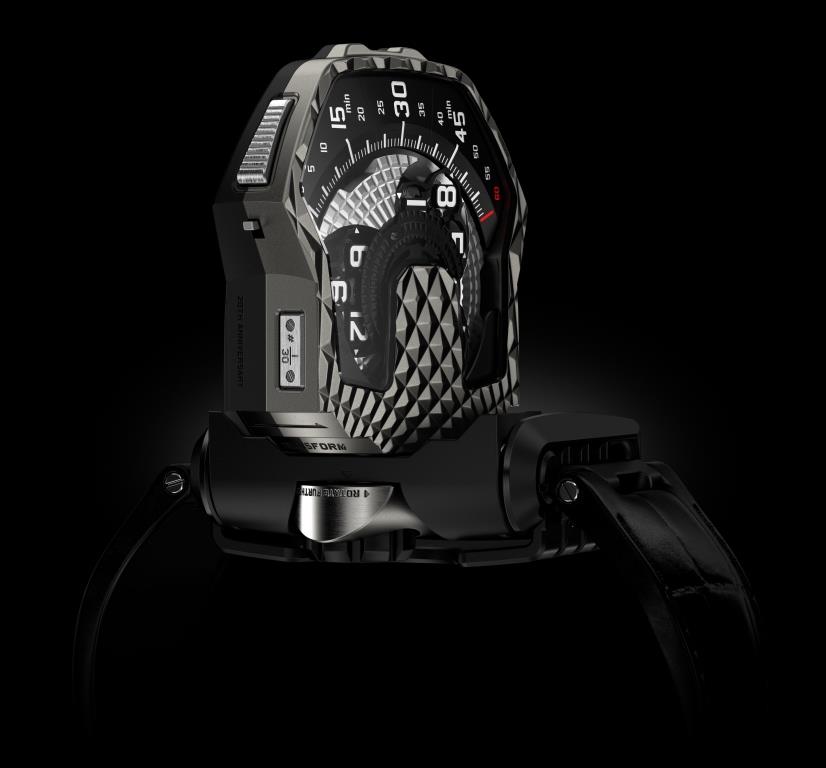 UR-T8
A satellite time display is curious in its own right, but the UR-T8 shrouds the time in mystery. Urwerk’s first transformable watch, the UR-T8 features a case that can unlock from its cradle, flip over, and click in place upside down, protected by a titanium, textured shield that seems almost prehistoric. Back on the time-telling side, this watch’s carousel bears Urwerk’s biggest satellite system yet for ultimate visibility. Available in natural titanium, or with a black PVD coating, the automatic watch also features a gilded spinning vane connected to the winding rotor, whose purpose is to absorb any sudden action that could interfere with the winding efficiency. 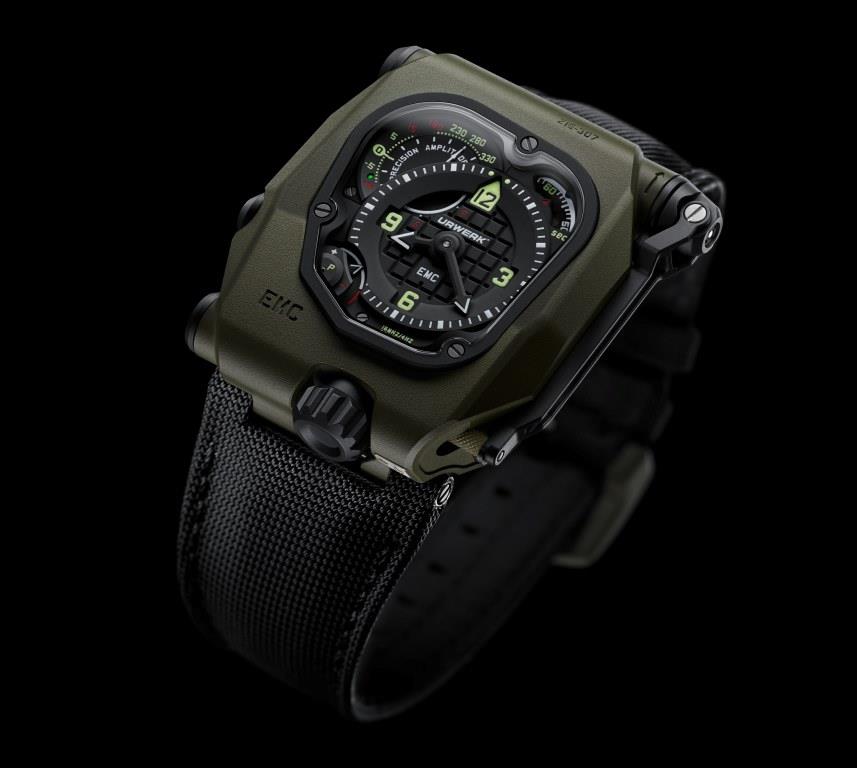 EMC
Hour hand, minute hand, a round dial…has Urwerk gone traditional? Not in the least. The EMC is an award-winning world’s first, a 100% mechanical watch with electronic indications built in for tracking the amplitude of the watch, and its precision. With this information, the user can finely adjust his watch to perfectly match his lifestyle. Whether cased in “TimeHunter” ceramic, or in PVD black titanium and PVD with an “X-Ray” dial, this truly smart watch also displays small seconds at 1 o’clock, a power-reserve indicator at 7 o’clock, and a performance and amplitude indicator at 10 o’clock. Turn it over to view the strange confluence of a mechanical movement woven together with electronic circuits.