Top 10 Vintage Watches To Have In Your Collection

There is something special about a vintage watch. Unlike a new watch that you get from a retailer or boutique, and you’re the first owner, a vintage watch has had a life before you, in some cases for a significant period of time. While the options for vintage watches are nearly endless, a few models have not only defined time but also made an important impact on the world of Haute Horlogerie. They have become icons of a certain time period or even a particular type of watch, and because of that became timeless.

Audemars Piguet Royal Oak A-Series
The Royal Oak that would introduce stainless steel as a precious metal and because of it changed the world of Haute Horlogerie. Designed by Gerald Genta and launched in 1972, it was the most expensive watch ever to be made in stainless steel, and while many doubted if it would ever work, it turned to be spot-on. 45 years later, the Royal Oak is not only still around but also accounts for the vast majority of the revenue that Audemars Piguet makes. The A-Series features the AP logo above the 6 o’clock position, and underneath the dial you can find ultra-thin AP caliber 2121, which is based on Jaeger-LeCoultre caliber 920. Collectors do face one dilemma when it comes to an A-series Royal Oak: While the stainless-steel version is what it is all about, the full-gold variety is actually rarer.

Patek Philippe Reference 3974
When it comes to vintage watches, there are so many Patek Philippes that deserve to be on this list. However, reference 3974 combines several aspects in a single watch that make it all the more special. Launched in 1989, it was the most complicated wrist watch in the world of its time. Designed to celebrate Patek Philippe’s 150th anniversary, it combined a perpetual calendar with moon phase and 24-hour indication with a minute repeater. The fact that the movement is automatic makes it a world-first.

Panerai Radiomir Reference 3646
When the Italian navy was looking for a watch to accompany its divers on combat missions, Panerai developed the Radiomir. Precise and robust, the watch featured an oversized 47mm cushion-shaped case that the divers would wear over their wetsuit. Visibility in low-light conditions was ensured thanks to the sandwich dial, which consisted of a lower disc coated with “Luminor” radiant substance, and a top one with cut-out numerals and hour indexes. Precision is ensured by the manual wind Caliber 618, which was provided by Rolex.

Omega Speedmaster
“One small step for man, one giant leap for mankind.” With these words Neil Armstrong became the very first man to set foot on the moon on July 20th, 1969. Around his wrist was the Omega Speedmaster reference ST105.012, a watch that would forever be known as the Moonwatch. In brutal tests executed by NASA, this Omega chronograph turned out to be the best suitable watch to accompany the astronauts on these missions. It proved this during the Apollo 13 mission when it played a vital role in the safe return of the astronauts as their module suffered from the explosion of an oxygen tank. Even today, the Speedmaster’s clean design is still surprisingly modern, and its connection to space ever so strong.

Cartier Santos-Dumont
Perhaps now perceived as small and dainty, the watch that Louis Cartier made for Brazilian aviation pioneer Alberto Santos-Dumont is the very first wrist watch for men. This fact alone makes it one of the most ultimate vintage watches to own. Its design has inspired generations of Cartiers that came after it, and it became a very important part of La Maison’s DNA. It is fitted with a manual wind movement made that Cartier sourced from Edmond Jaeger, one of Paris’ best movement designers, who had them manufactured by LeCoultre.

Heuer Monaco
There are several reasons why the Heuer Monaco is a landmark in historical watchmaking. First and foremost is the movement that powered it. Fitted with calibre 11, it was the very first automatic chronograph to hit the market. As common as this is today, in 1969 it was nothing short of a revolution. Plus, the Monaco also had character, with a square case, featuring the chronograph pushers on the right side and the crown on the left. Pop culture also helped to make this watch a success, as Steve McQueen wore it in the movie “Le Mans,” which for many people is enough reason alone to pursue the ownership of one.

A. Lange & Söhne B-Uhr
As sad as it sounds, warfare has always had a way of inducing rapid innovation. During World War II a watch was a very important instrument for aviators―not only to navigate, but also to time their bombing raid. The German air force, the Luftwaffe, commissioned special watches for this purpose from five different manufactures, and among them was A. Lange & Söhne.
The B-Uhr which they made, with the B standing for “Beobachtungs,” meaning “observation” in English, was housed in a 55mm case that pilots and navigators strapped around their legs. It was fitted with a hand-wound movement featuring a swan-neck regulator and center seconds, while an oversized crown made it easy to wind with gloves. Although this type of watch is still very popular today, having the real deal is all the more special.

Rolex Submariner Reference 6538
Rolex is yet another brand that one can easily fill a top 10 of vintage watches by itself. Picking just one is a daunting task, and that pick is open for debate. While many watches have set industry standards, the Submariner became the archetype for divers’ watches. With reference 6538 we are going back to the essence of this watch, without a date function yet but with the characteristic black dial and bezel, as well as the signature “Mercedes” hour hand. As if this isn’t enough pedigree, this Submariner was also the watch of choice by James Bond in the movie “Goldfinger.” 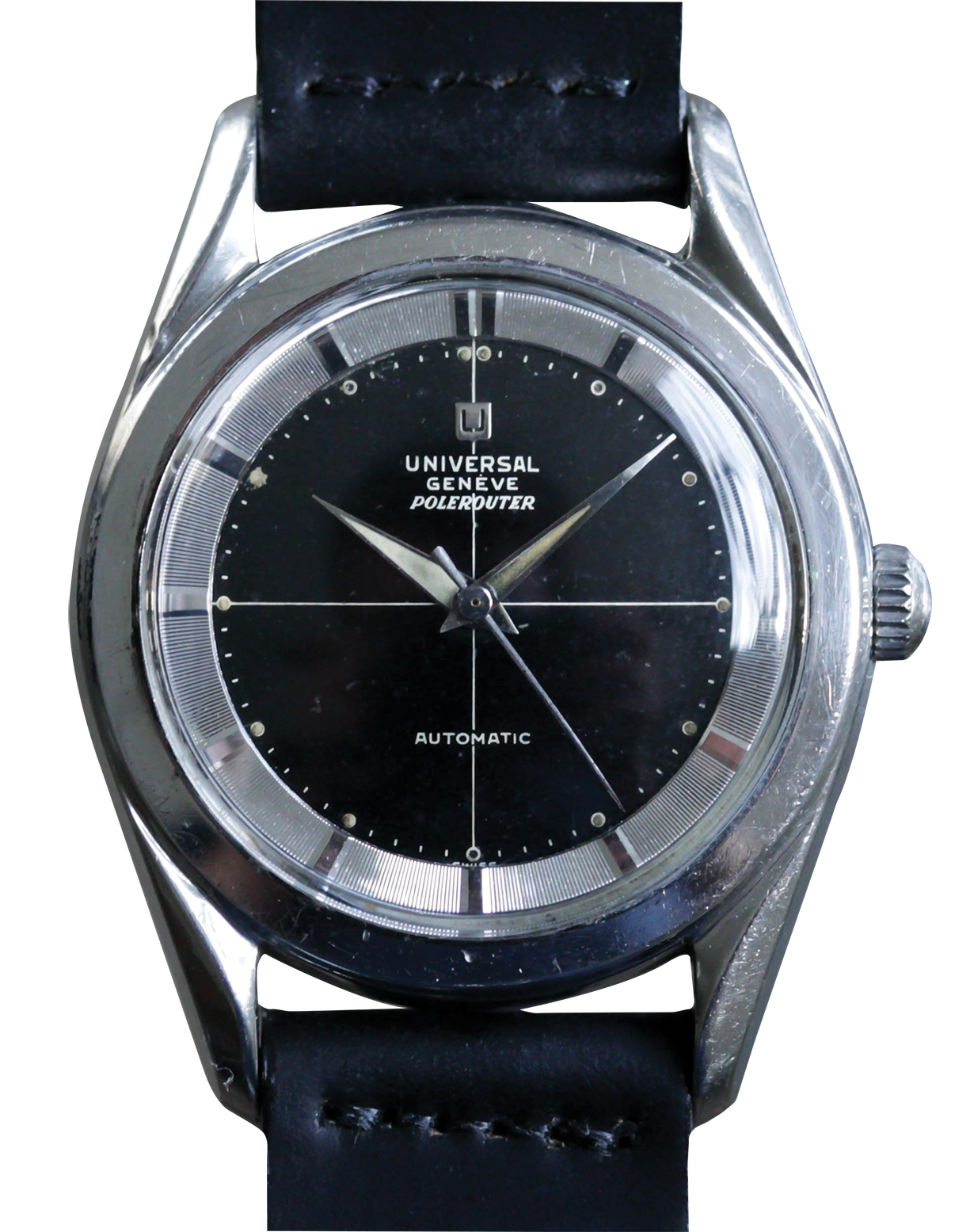 Universal Genève Polerouter
Perhaps an unexpected entry in this top 10, but the Universal Genève Polerouter comes with an impressive pedigree. It was developed especially for Scandinavian Airlines (SAS), which opened a new route on November 15, 1954 by flying over the North Pole to North America. The Polerouter was standard issue for the pilots who flew on this route and designed to handle the more intense magnetic fields of the polar region. Except for the short-lived first series, which featured a caliber 138 SS bumper automatic and was named Polarouter, the watch was fitted with Universal Genève’s caliber 215. This micro-rotor movement played an important role in the history of Universal Genève. There is one other thing that puts the Polerouter in this list: It was the very first design by Gerald Genta that was actually taken into production!

Jaeger-LeCoultre Reverso
Who would have thought that a novel way to protect the then-fragile watch crystals from the harsh environment of a polo match would turn into a legend? The swiveling case of the Reverso has been a staple in the watch scene ever since its conception in 1931. By turning the watch case around the metal, the caseback protected the watch. It was, however, the elegant look of this rectangular Jaeger-LeCoultre that would give it staying power, and make it one of the pillars of the brand. Although it makes beautiful reissues of the original 1930s models, there still is a particular pleasure in owning the original.