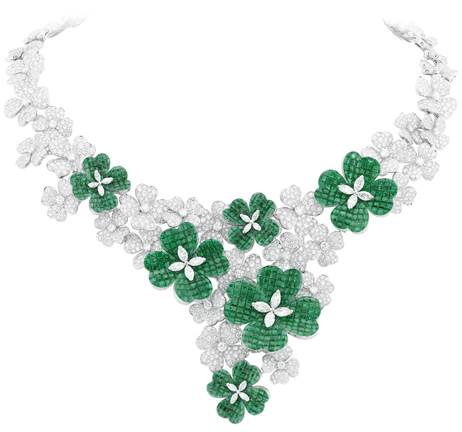 Amongst the creations on display are the Zip™ necklaces, which were first produced in 1951; jewelry featuring the Mystery Setting™ technique patented in 1933 and transformable long necklaces with moveable motifs. The pieces presented further highlight the brand’s most cherished themes of nature, luck, art, culture, fantasy and poetry such as found in the collections of Les Jardins, Ballet Précieux, Bals de Légende and Palais de la chance™.

One of the most notable pieces is the Zip Couture Palmyre necklace. The piece is characteristic of the couture theme of Van Cleef & Arpels as well as reveals its continual interest for transforming objects, movement and versatility. The closure system was first used on aviator jackets and sailors’ uniforms before being appropriated by the fashion world in the 1930s. Around 1938, the Duchess of Windsor suggested to Renée Puissant, the Maison’s Artistic Director at the time, to create a piece of jewelry inspired by this technological marvel. The piece was eventually created in 1951. The Zip™ can be worn open as a necklace or a bracelet, with the tassel fringe at the center that can slide up transforming the zipper into a bracelet.

One of the Maison’s favorite themes is that of nature, which finds itself revealed through an array of startling creations. With Les Jardins collection Van Cleef & Arpels draws on the art of ornamental gardening in an attempt to revisit the natural world that has inspired so many of its creations. The Victoria set is inspired by Victoria Park, which is known today as Hyde Park. It features a delicate work of stone polishing and setting, the latter of which is one of particular note with the metal being concealed to better reveal the stones, in terms of both their shape and size. At the center of the necklace is the choker, which gives rise to two bell flowers, from which emerge two asymmetrical delicately interlaced stems. In this piece asymmetrical form gives rise to movement, dynamism and the fleeting impressions that’s so often characterize the natural world.

Also presented are several of the Maison’s most eminent timepieces. One is the Lady Arpels Ballerine Enchantée timepiece that features a half-dancer, half-butterfly images on its face celebrating the tradition of ballerinas and fairies to which the Maison is so attached. The piece comes to life through an inner corolla of champlevé enamel that clothes the dancer and also serves as outer veils – like a pair of openwork wings, displaying time through a retrograde movement.

Another timepiece on show is the Lady Arpels Féerie Rouge timepiece. The minutes of this iconic timepiece are marked with the fairy’s central wing, while the hours are ascertained with the elegant movement of her wand. This enchanted piece of jewelry is now available in a ruby red color dial.

The Doha Jewellery and Watches Exhibition runs until March 2 at the Qatar National Convention Center. For more information, visit www.djwe.qa.