Rolex Daytona: The Legacy of a Beach Boy 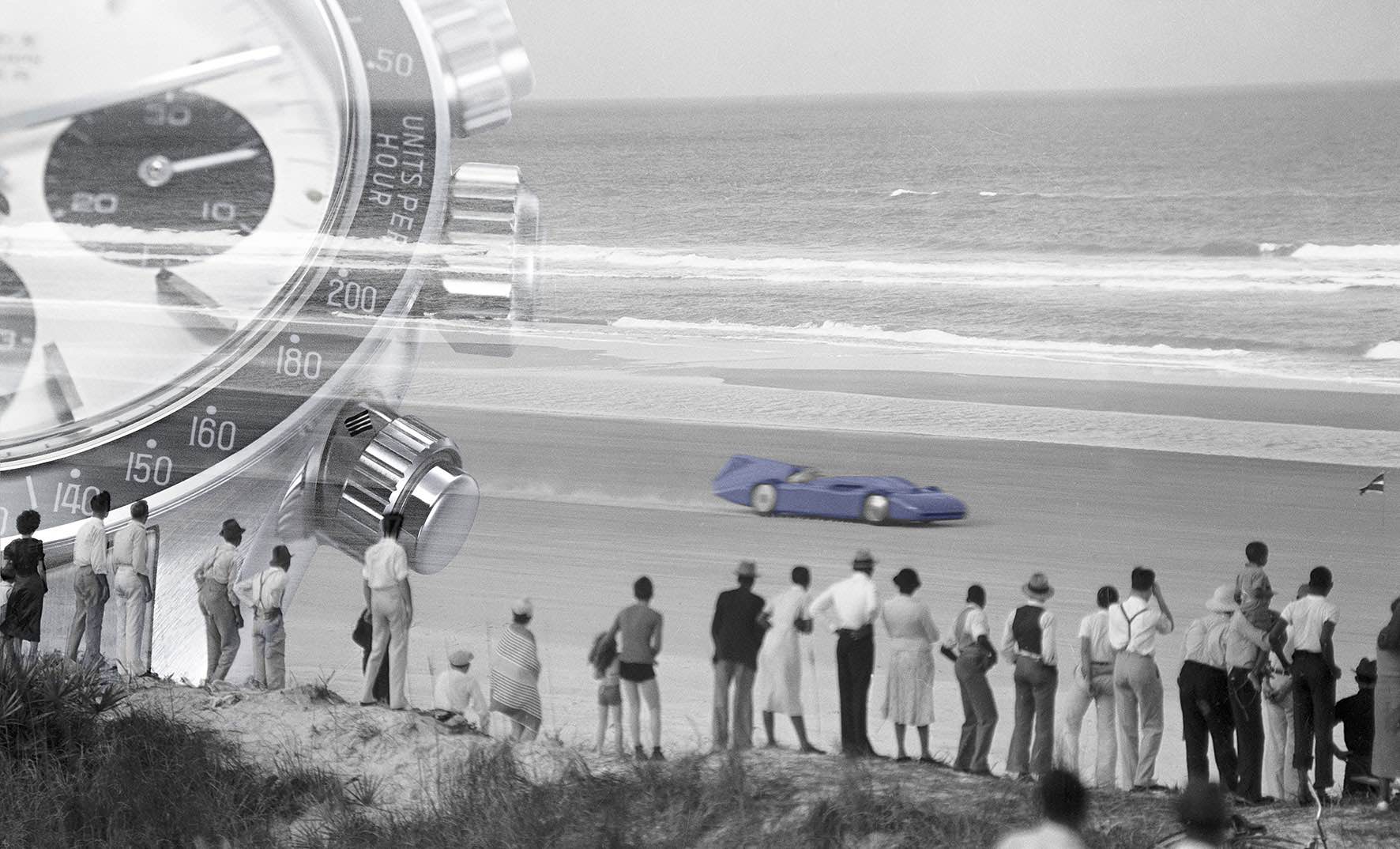 The genius that was Hans Wilsdorf revolutionized watchmaking in more than one way. Not only in a technical sense, but also by marketing them in a way that was quite revolutionary for the time. For instance, Wilsdorf equipped Mercedes Gleitze in 1927 with a Rolex when she made history swimming across the British Channel, proving her own strength and resilience and that of her Rolex as well. But at that time watches were not the only product that enjoyed rapid, technical advancements; cars were turning from motorized carriages into the vehicles we know today. Limits were pushed, records were broken, and many of them happened at Daytona Beach, Florida.

Wilsdorf recognized it as a place where Rolex belonged, and joined forces with one of the fastest drivers in the world that raced at Daytona Beach, Sir Malcolm Campbell. As a result, the first celebrity ambassador was created. Campbell would always wear a Rolex around his wrist and was even featured in various magazine and newspaper ads for Rolex.

Campbell broke the world land speed record five times at Daytona Beach, yet became concerned with the deteriorating state of the track and moved to Bonneville Salt Flats in Utah, where he stayed faithful to Rolex. On September 4, 1935, he steered the legendary Bluebird through the 300 mph barrier, with one of the brand’s watches around his wrist.

In 1936, the track at Daytona Beach became the location where the world’s first endurance stock car race was being held, which was 78 laps, or 250 miles, long. In 1938 management was taken over by William France Sr., who would become one of the founding fathers of NASCAR. The track on Daytona Beach would evolve into the Daytona International Speedway, home of the Daytona 500, and up until today the most prestigious race in NASCAR. 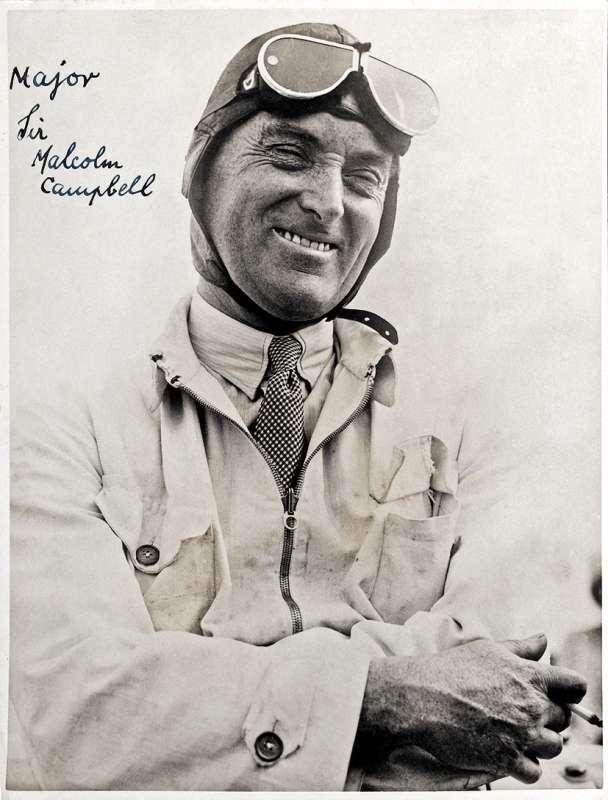 Just like Campbell, France Sr. was also featured in Rolex advertisements. What is interesting though is that neither one of them wore a chronograph. France Sr. wore a Rolex Zephyr; Campbell wore the early Oyster models. Rolex already had chronographs in its collection, powered by Valjoux movements, but it wasn’t until 1955 that they introduced a chronograph in an Oyster case. This reference 6234 was not named Daytona yet, but would later evolve into reference 6238, which comes much closer to the Daytona we know. In fact, the second series of reference 6238 is referred to, by Rolex connoisseurs, as the Pre-Daytona. Both references 6234 and 6238 featured a 37mm case and was powered by Rolex Caliber 72. This movement was in fact a slightly reworked version of the Valjoux 72, a reliable manual wind chronograph movement featuring a column wheel. Reference 6238 is actually also a bona fide Bond-watch, featured on the wrist of George Lazenby, as he takes on Blofeld at the Piz Gloria, Switzerland, in ‘On Her Majesty’s Secret Service.’ The 6238 was a much more modern looking watch than the 6234, mainly thanks to the dial with its stick hands, rectangle hour markers, and larger sub-dials. But the bezel was still smooth and polished.

That would change with the introduction of the reference 6239 in 1963. Although Rolex had already registered the name “Cosmograph” in 1953, and in 1956 they actually used it on a moon phase model, reference 6239 became the first chronograph to bear this name. To create a more legible dial, Rolex moved the tachymeter scale from the dial and engraved it into the bezel: a hallmark feature was created. To increase legibility even more, it was offered with a silver dial and black counters, or reversed, featuring a black dial with silver counters.

Ironically Rolex first named the chronograph after another famous endurance race, Le Mans, although this only appeared in a few ads and was never printed on the dial itself. 1965 was the first year that Rolex printed the name Daytona on the dial. Next step in the Daytona’s evolution came when reference 6240 hit the market in 1965. Although Rolex offered a chronograph in an Oyster case a decade earlier, this Daytona was the first one to feature a screw down crown and pushers, greatly increasing its water resistance and making it more a true Oyster. This was also the first model that was produced only with a black acrylic bezel.

In the early 1970’s Rolex fitted the Cosmograph Daytona with the new caliber 727, which was a Valjoux 72 fine-tuned by Rolex. The case remained 37mm in diameter and Rolex released four new models in rather quick succession. Reference 6262 featured a steel bezel with an engraved tachymeter scale, while reference 6264 featured a black bezel insert with the tachymeter scale. Both of these references had push-down buttons to operate the chronograph. This seems like a devolution, since reference 6240 introduced the screw down pushers, but it was probably more Rolex’s intention to let the customers choose between increased water resistance or a more easy to use chronograph function on their Daytona. Next to the reference 6262 and 6264, Rolex also introduced reference 6263 (with black bezel insert) and reference 6265 (with engraved steel bezel) that did feature the screw down chronograph pushers. Waterproof up to 100 meters, they actually stayed in the collection from 1971 to 1987.

The 1970’s were also the time when another legend became an intricate part of the history of the Daytona. To mark the start of his racing career in 1972, Joanne Woodward gifted a Rolex Daytona reference 6263, black dial with white sub-dials, to her husband, movie star Paul Newman. That was the beginning of a lifelong passion for the Daytona, and a very successful racing career. Newman’s most memorable achievement came in 1995, when at the age of 70 years and eight days old, he finished third overall and won the GT-class of the 24-hour endurance race at Daytona.

Although Newman wore Daytona’s until his death in 2008, one of his most famous ones must have been the Daytona reference 6241 with so-called “exotic” dial. What set this dial apart from the other Daytona dials was the fact that it featured an outer track with the hour and minute indicators that had the same color as the sub-dials. The sub-dials featured a cross-hair design and the lines were replaced with block markers. The sub-dial for the running seconds was not divided in the usual 20, 40 and 60 increments, but showed 15, 30, 45 and 60. Newman wore this Daytona on a military-styled leather strap that he seemed to favor during a photoshoot in 1972. That photo, and Newman’s continuing passion for the Daytona, resulted in what we now call the “Paul Newman Daytona.”

1988 became a breakthrough year in the history of the line, when Rolex started to produce the new Oyster Cosmograph Daytona, starting with the reference 16500 series. This watch was a revolution in many ways; Rolex increased the case size from 37mm to 40mm, replaced the plexiglass for sapphire, but most importantly the movement was changed. The Daytona was now powered by caliber 4030, the first automatic movement ever to make it into the Daytona. Caliber 4030 was in fact Zenith’s El Primero calibre 400, yet extensively reworked by Rolex. To even further increase the reliability of this movement, Rolex reduced the beats per hour from 36.000 to 28.800, replaced the escapement and balance wheel, and removed the date function.

By now, mechanical watchmaking was also entering a renaissance. While Rolex had quite a challenge selling its mechanical chronographs in the past, the demand for the reference 16500 series, especially the steel reference 16520, was so strong that it could not be met. Zenith had a limited supply of the El Primero base movement that Rolex used. For years Rolex retailers did not have any steel Daytona’s in stock, and the waiting list to get one was counted in years, if you were lucky enough to even make it on one. This of course did not harm the reputation of the Daytona, which had by now reached cult status.

But Rolex was ready to take the next step in the evolution of the Daytona. They started to develop an automatic chronograph movement, which was introduced at Baselworld 2000. This caliber 4130 was created in typical Rolex-style. The whole design of the movement was aimed at reliability and making the movement easier to service. This is quite a feature because caliber 4130 is a fully integrated chronograph movement. That means that the movement was developed to feature a chronograph function in the first place and it’s not an automatic movement with a chronograph module added on top of this. Serviceability is often more complicated with integrated chronograph movements, yet Rolex achieved this by bringing down the amount of components by about 20 percent, compared to caliber 4030. They also enlarged the balance wheel, featuring Rolex-owned Parachrom balance-spring, which results in increased accuracy, while mounting it under a full bridge increases stability and shock resistance. They also enlarged the main spring barrel, now good for a power reserve of 72 hours. This main spring barrel can be removed without having to take the whole movement out of the case. A column wheel and vertical clutch ensure the accurate operating of the chronograph.

Of course a new movement also means a new Daytona. At first sight, reference 116500 only shows subtle differences with reference 16500, but a closer look shows significant changes. The running seconds changed place with the hour counter and both the hands as well as the hour markers increased in size, making the Daytona easier to read. Although still 40mm in diameter, the case was thinner thanks to the new movement. Other improvements were the new bracelet and clasp, which now featured a clasp with the Easylink expansion. To make the watch more difficult to fake, the Rolex-crown was micro-etched in the sapphire crystal at 6 o’clock. Although invisible to the naked eye, it’s clearly visible under magnification. 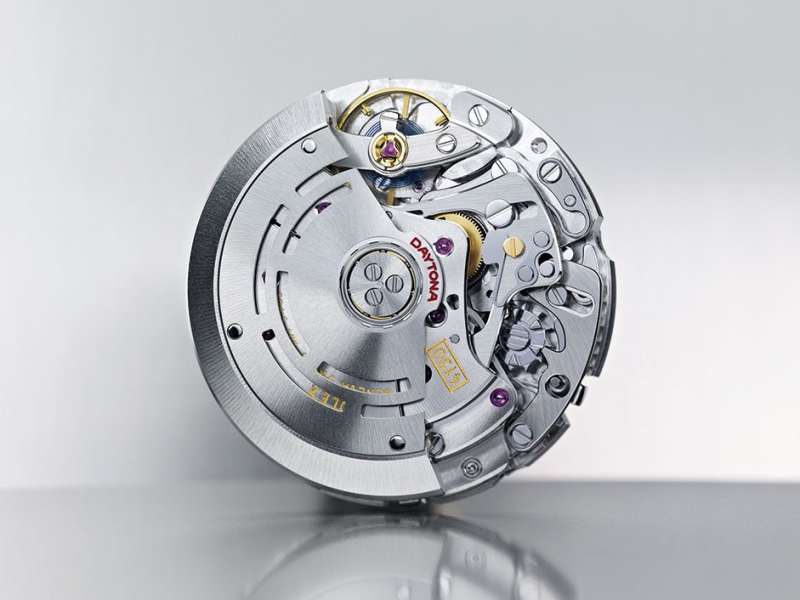 The year 2011 marked the introduction of the first Daytona with a Cerachrom bezel. Reference 116515 was crafted from Everose, Rolex’s exclusive pink gold alloy. It provides a nice contrast with the Cerachrom bezel, which is made from an extremely hard type of ceramic that is virtually unscratchable. One nice detail is that the Cerachrom bezel looks very similar to the black bezels on the Reference 6240. The Cerachrom bezel can also be found on reference 116506LN, the model Rolex introduced to celebrate the Daytona’s 50th anniversary in 2013. Crafted from platinum, this Daytona features an ice-blue dial, combined with a brown Cerachrom bezel and a brown outline of the counters on the dial.

Today the Daytona is perhaps more alive than ever. This became especially clear at Baselworld this year, when one of the highlights of the fair was the new Daytona. Rolex delighted the world by introducing the black Cerachrom bezel, now also on the all-steel Daytona. This reference 116500LN features a two-tone dial with either black or white as the base color, and contrasting outlines of the counters, but it’s the bezel that gets the fans so excited! Because in the steel variety, the link with those first Daytona’s was going back to more than half a century ago, when this now legendary watch really came to life on that beach in Florida.

Tourbillon Masterpieces From A. Lange & Söhne