Happy Birthday MB&F! Maximilian Büsser and his friends are blowing ten candles this week, and have decided to celebrate in style. But instead of receiving a gift, the independent brand has decided to give one back to those who have believed, supported and invested in it over the last decade. And what gift it is. 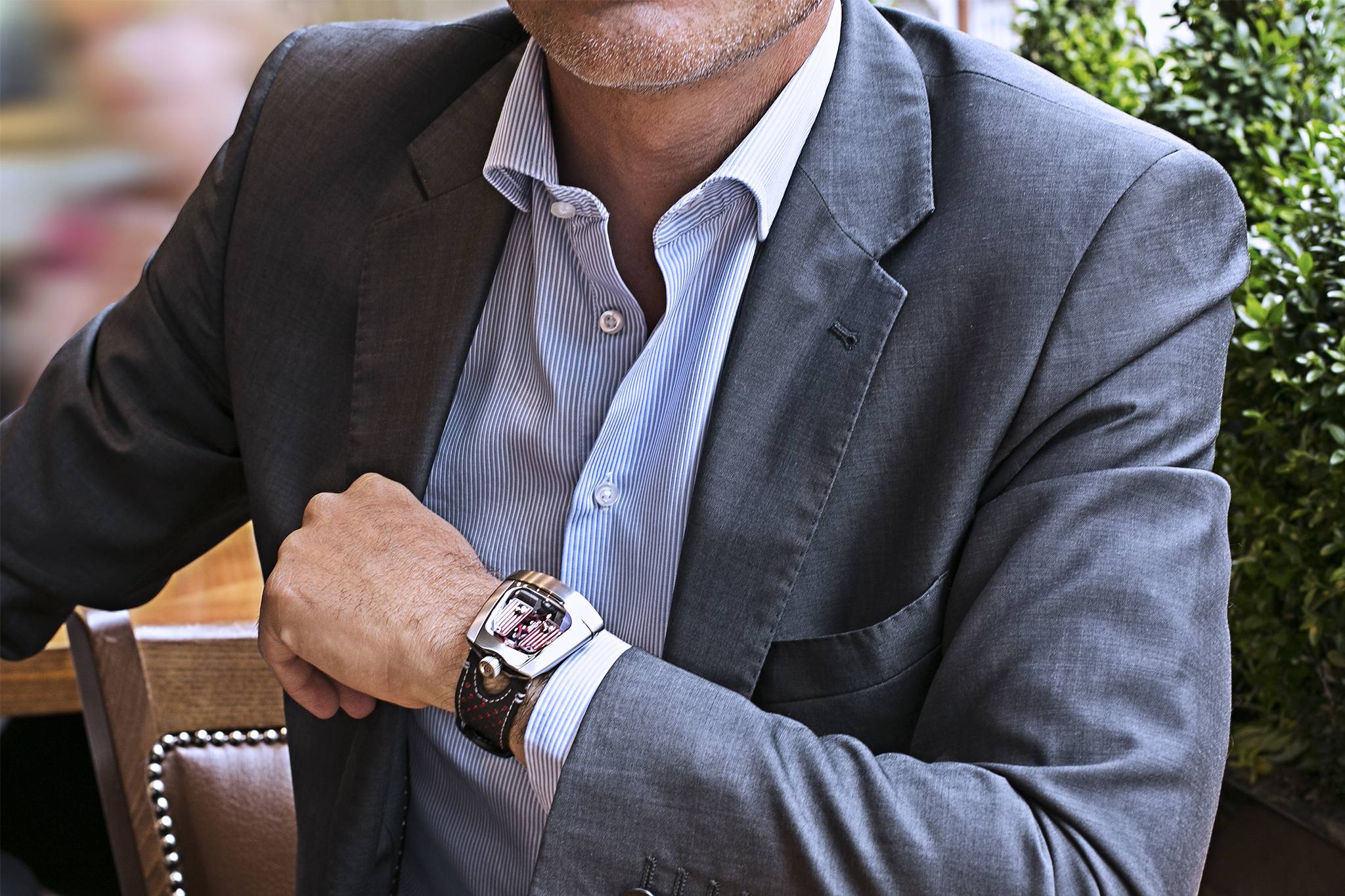 The HMX is being released at an unprecedented price: CHF 29,000 Swiss Francs. The brand has indeed decided to go against the grain and sacrificed its margins to be able to present the most affordable MB&F ever made. 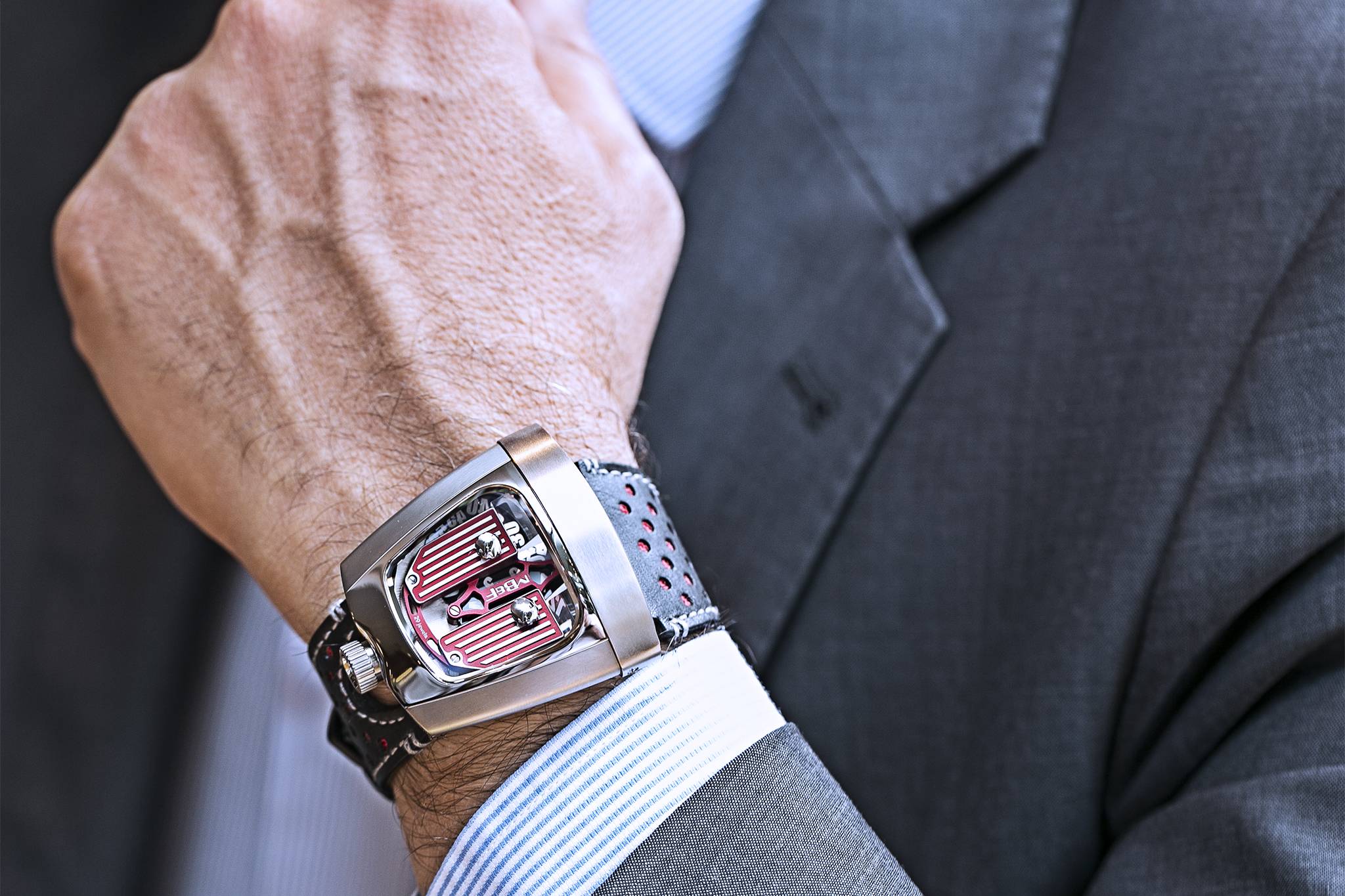 “It’s not about making watches, it’s about watchmaking,” explained the brand’s CEO, Maximilian Büsser. Engraved at the back, the motto “A Creative Adult Is A Child Who Survived” perfectly sums up the spirit of the brand created in 2005, by a watchmaker who once dreamt of becoming a car designer. 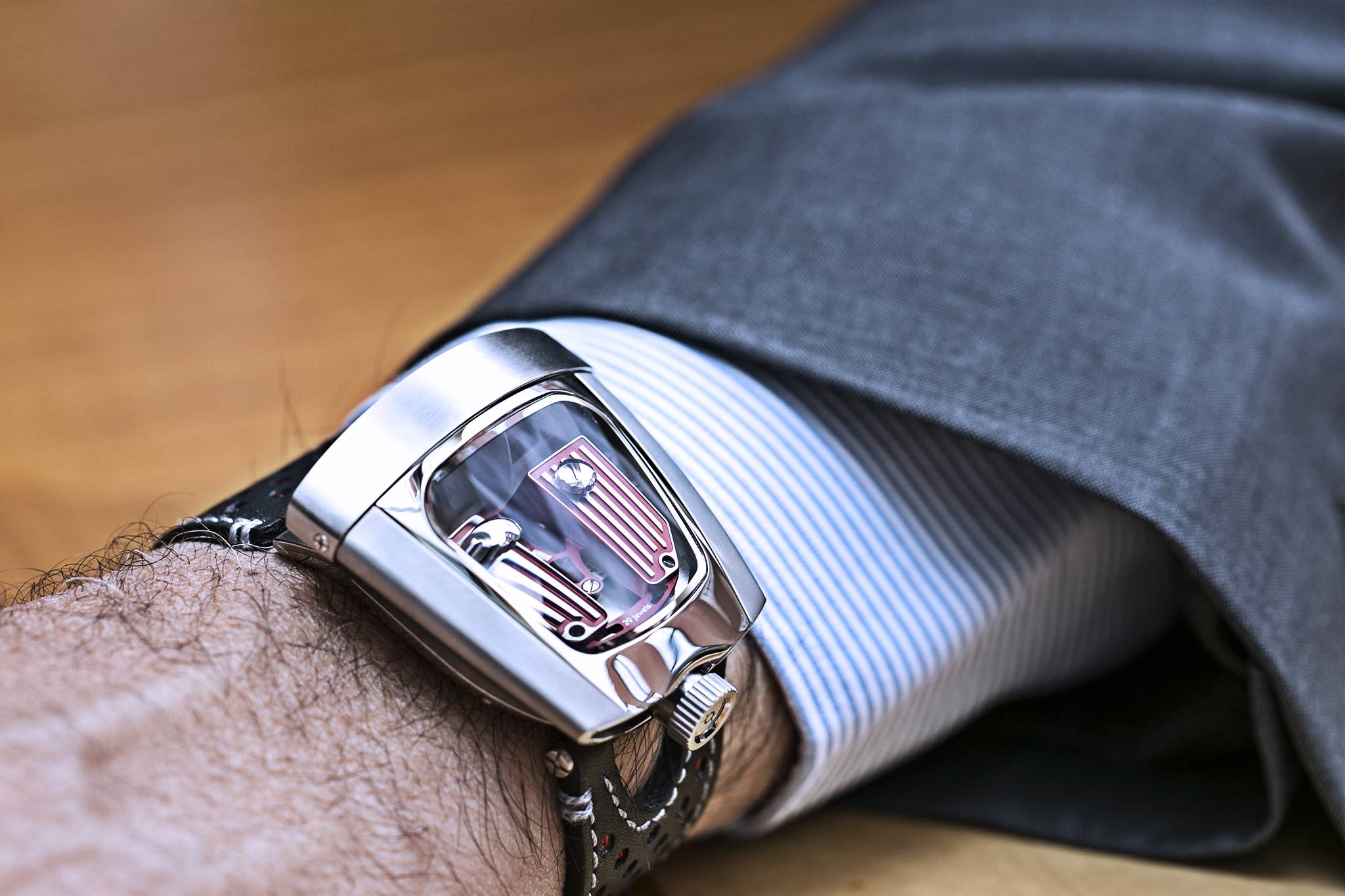 And the latest Horological Machine, named X after the Roman numeral for 10, pays homage to the creative studio’s ever energetic and child-like wonder. The new Horological Machine is the latest auto-inspired MB&F, reminiscent of the brand’s HM5 “On the Road Again,” a driver’s watch with the time displayed on the side, thanks to two sapphire crystal optical prisms that “project” the time onto the front vertical display. 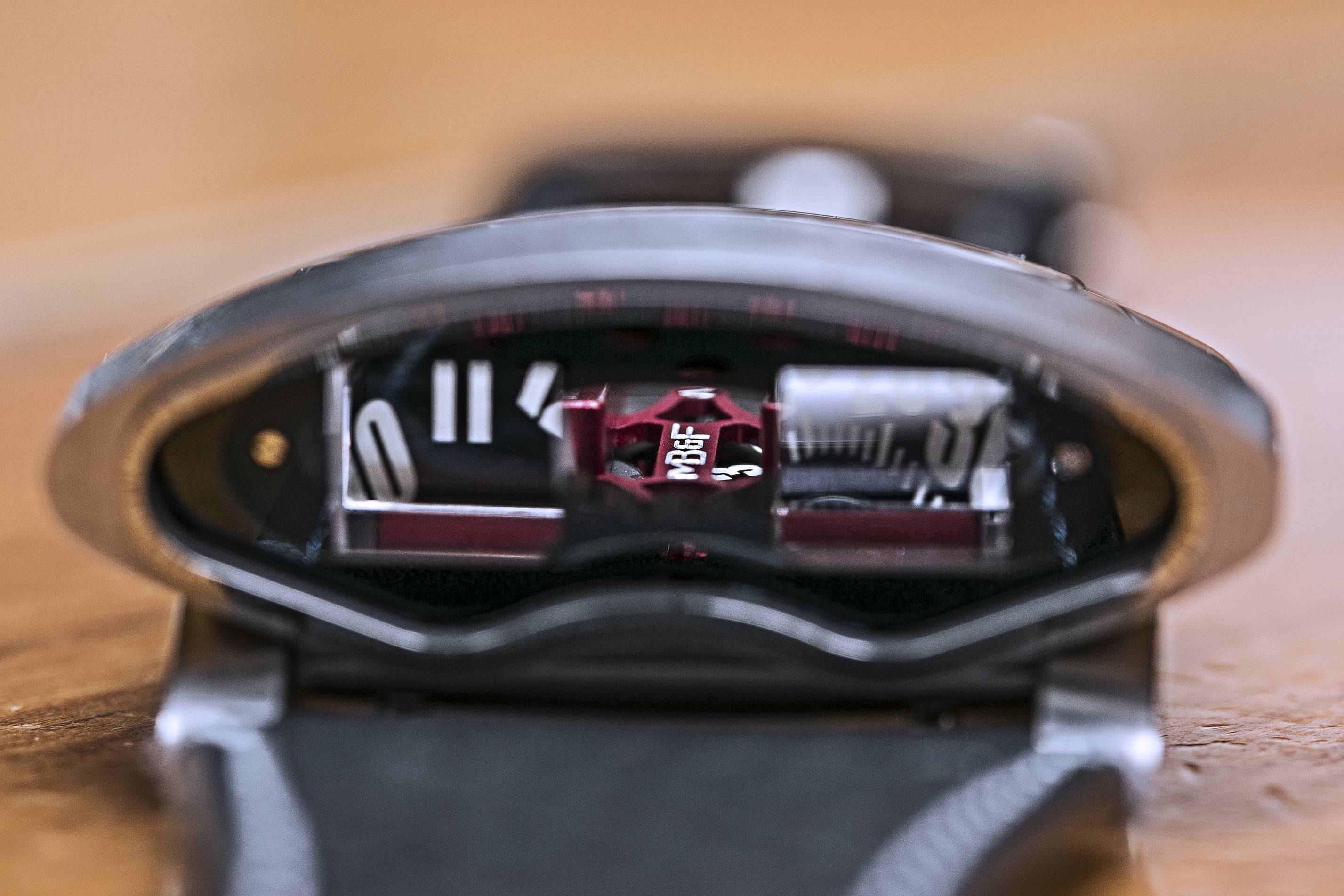 Just like the HM5, the HMX draws its lines from iconic automobiles. In particular, the distinctive Superleggera style of renowned Italian coachbuilder Carrozzeria Touring – creators of automobiles like Alfa Romeo’s Disco Volante – resonates throughout the “coachwork” of the Machine. 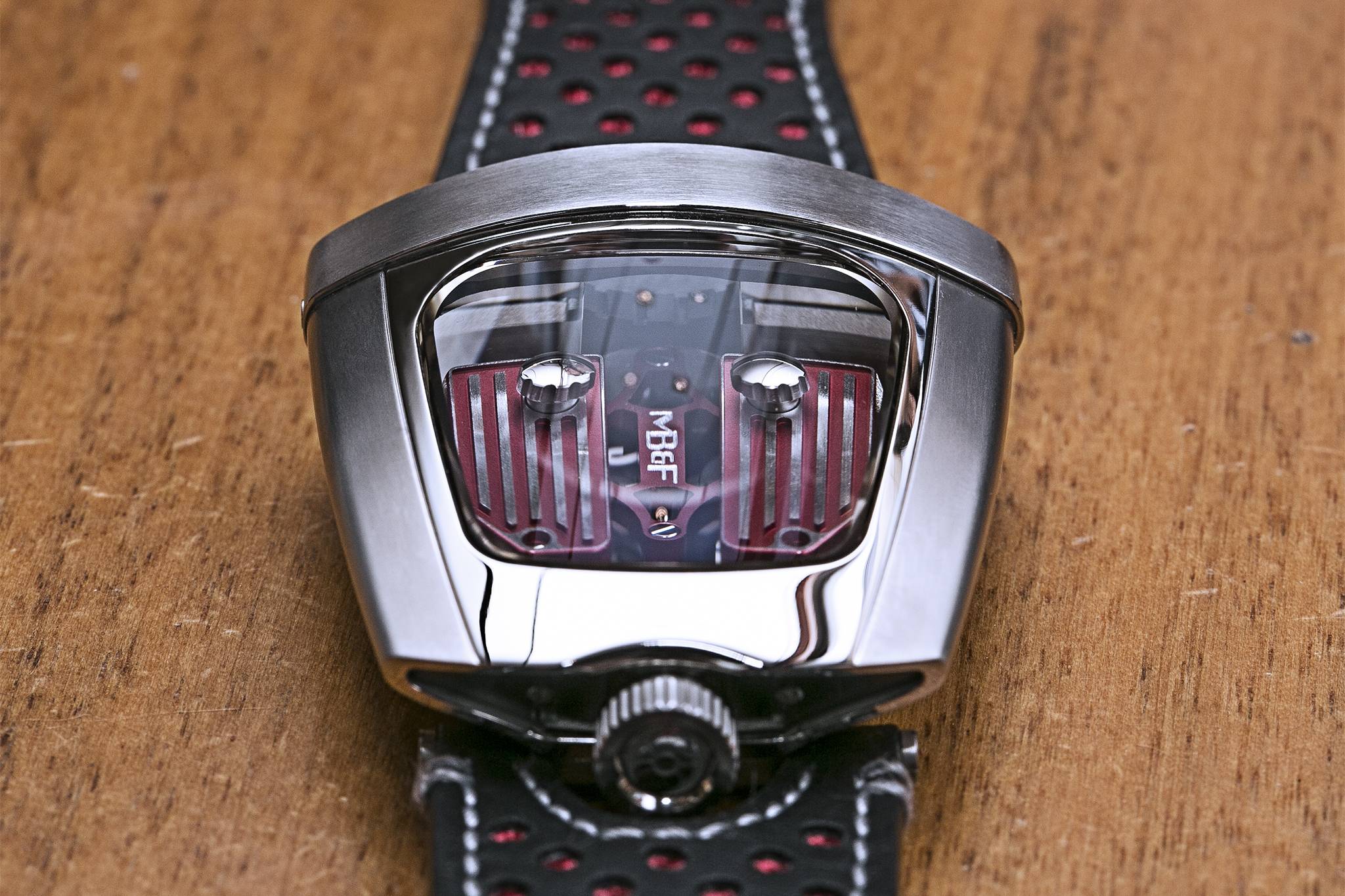 A curved and streamlined case in titanium and steel protects the watch, which features a large sapphire opening to show its super engine, with dual “rocker covers” each featuring shiny chrome oil filler caps. These oil caps are not just pretty design elements, but are fully functional oil caps that the watchmaker unscrews to oil the bejeweled bearings for the indication discs. 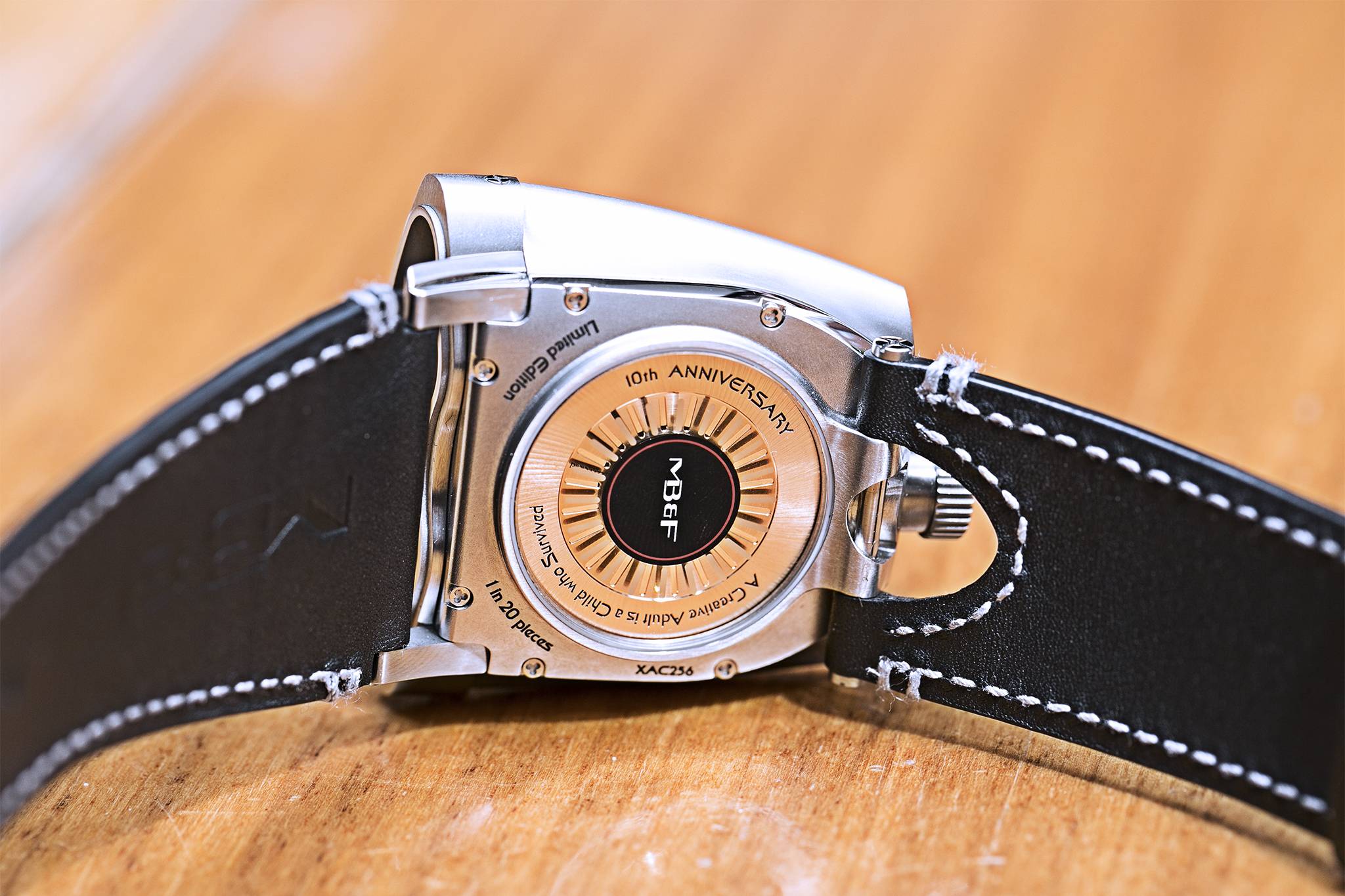 The HMX features a bi-directional jumping hours and trailing minutes. These are reflected 90° and magnified by two sapphire crystal optical prisms. Light streaming through the transparent engine illuminates the top of the watch’s engine and backlights the time display for higher legibility. For this birthday surprise MB&F has added a splash of color to the new machines, presenting four limited editions of 20 pieces in Lotus Black, Ferrari Red, Bugatti Blue or British Racing Green. 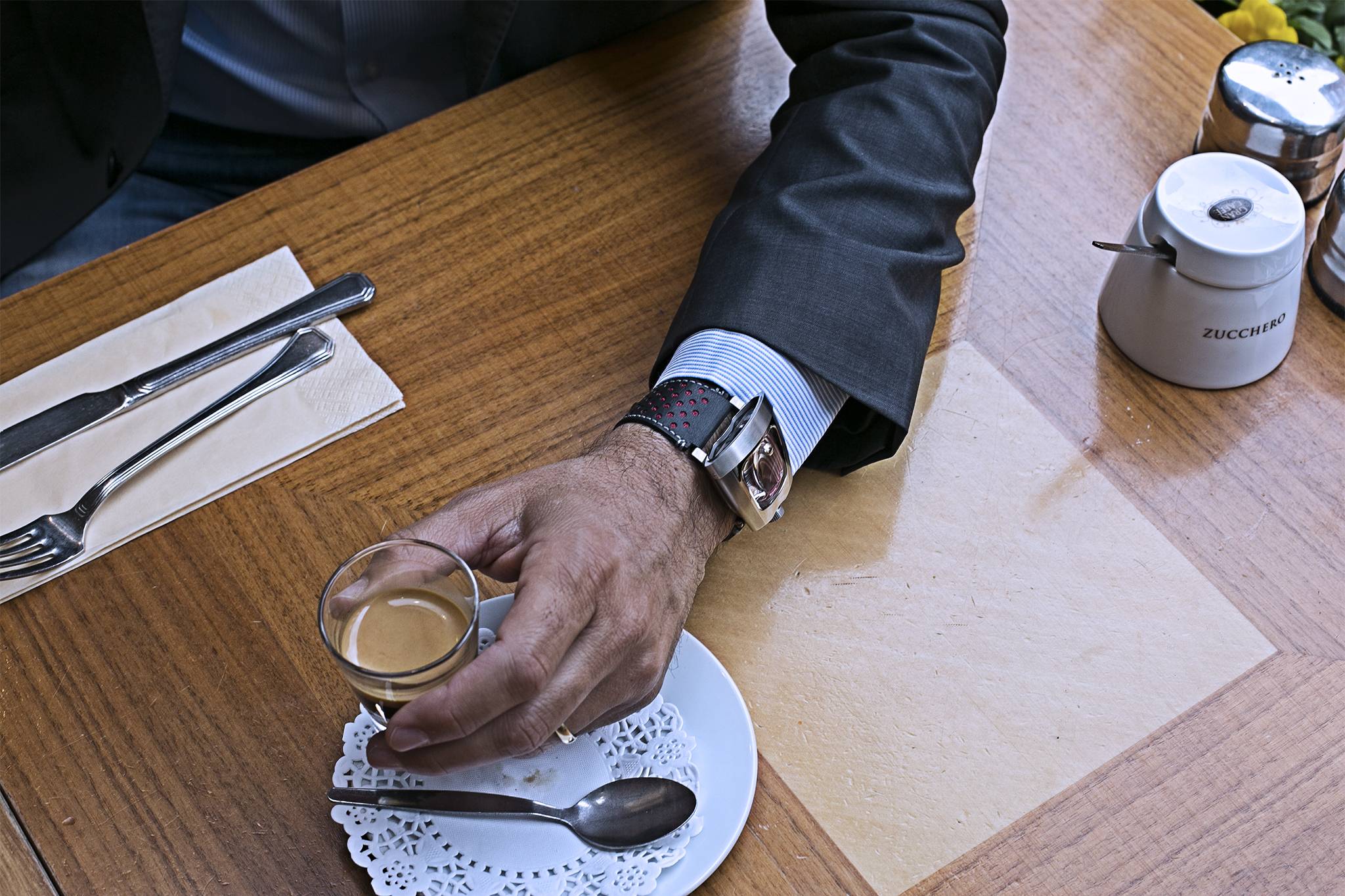 Many niche watch brands come and go, and MB&F has revealed the past ten years have not been a smooth and easy ride, “but a wild, unpredictable, constantly challenging adventure.” But the brand has held in there, and in the last few years soared to become one of the most successful independent watch brands of the modern era, doing so with limited production and a distinctive style. 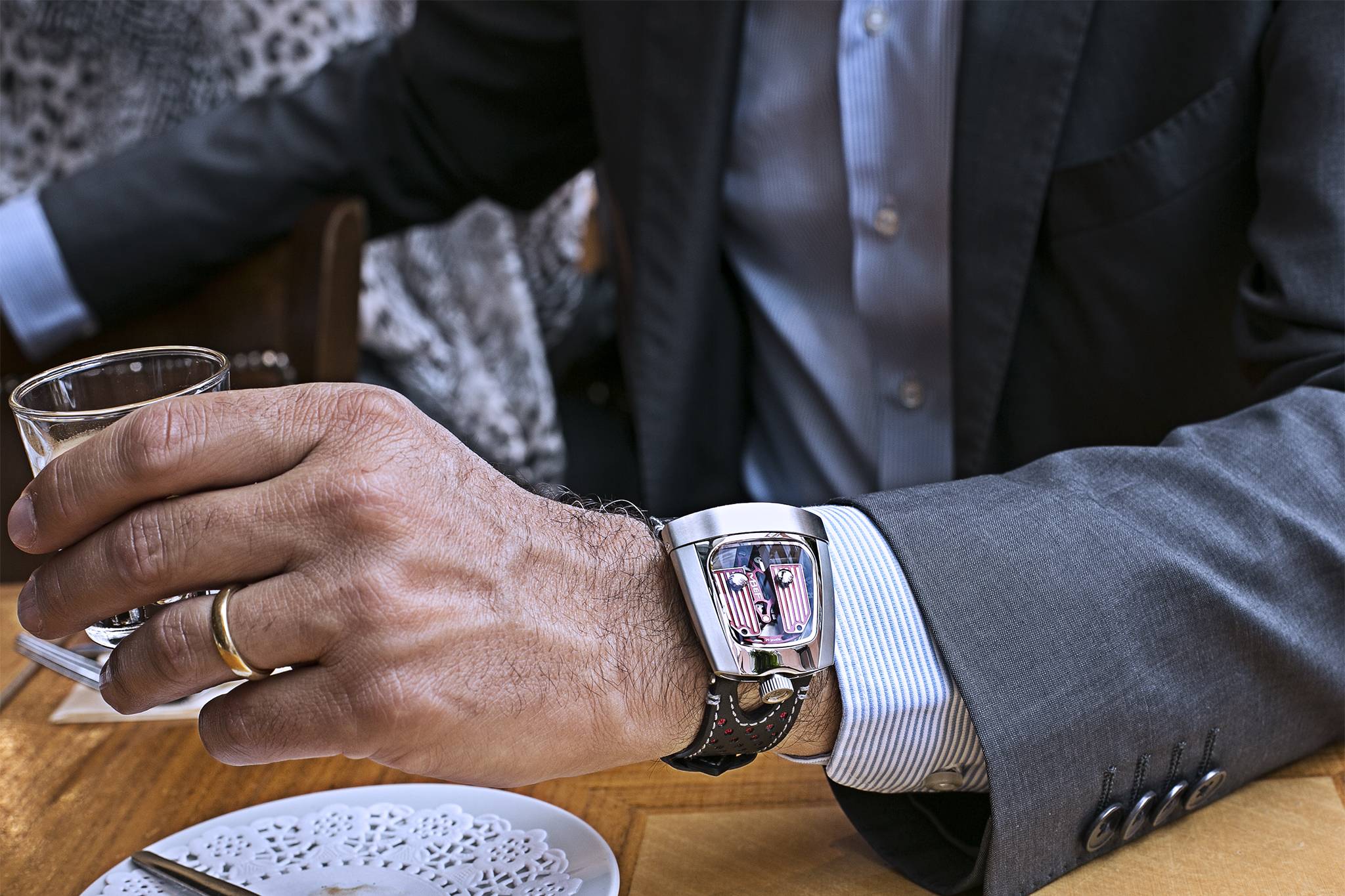 Having developed a cult following, MB&F continues to put its clients first with the new HMX. So here’s to Max and his friends. Happy birthday from all of us at Haute Time and we look forward to seeing what the next 10 years will provide.

Photo Credit: Haute Time. For more information, please visit the official MB&F website. Follow Haute Time on Instagram to catch all of the new releases as they happen.