I’ve always thought it would be great to be a watch company president, meeting all those glamorous ambassadors and participating in cool sponsorships.

Take Antonio Calce, for example, the CEO of Corum Watch. A couple of weeks ago he hosted an awards dinner with the 14-member crew of the Banque Populaire V sailing team just after it won the Jules Verne Trophy. Calce presented special editions of the brand’s Admiral Cup model to each member of the team, which set a new world record (23 hours, 14 minutes and 13 seconds) for the fastest circumnavigation of the world. 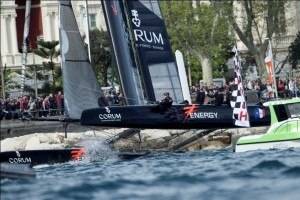 This week, Calce was in Naples, along with a crew of French journalists, to witness the fourth stop on the America’s Cup World series, in Naples, Italy, where Corum was the sponsor of the French challenger, the Energy Team. The team placed fourth, and everyone had a good time.

The Admiral’s Cup, with its signature 12-sided case, is Corum’s flagship collection, first launched in 1960.