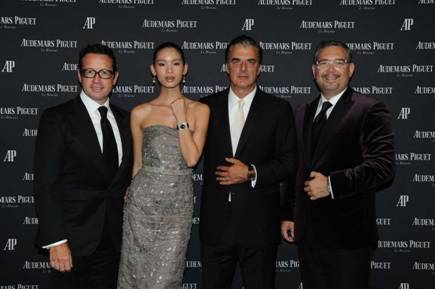 After kicking off in New York, stopping in Milan then Paris and its stint here in Beijing, the exhibition will continue to its final stop in Singapore in October.

The Audemars Piguet Royal Oak, launched in 1972, is considered as the world’s first luxury sports watch that broke the rules of fine watchmaking and sparked a complete paradigm shift in the industry. To celebrate the 40th anniversary of this world-famous iconic timepiece, the Swiss Manufacture from Le Brassus in the Vallée de Joux has put together a unique and ephemeral global travelling exhibition.

To celebrate the opening of the Royal Oak 40 Years Exhibition, Audemars Piguet held an illustrious gala dinner on August 29th and an influencer’s party on August 30th. Nearly 500 distinguished guests were present at the opening ceremony, with many celebrities invited from all over the world. Famous American actor Chris Noth, renowned Chinese stars Hu Jun and Zhang Yuqi as well as international supermodels Du Juan, Chen Bike and Kang Qianwe all wore Royal Oak watches as tribute to the avant-garde hundred-year Manufacture. Sound, also an integral part of the evening’s program was provided by The Irrepressibles, a band Audemars Piguet selected because of its reflection of one of the brand’s core values: passion. The band’s theatrical stage presence captured the crowd’s attention and was one of the evening’s highlights.