The RM 031 High Performance is a very conventional product, set powerfully in the realm of Haute Horlogerie and its expertise. Experience gained over the last few years have been combined in the elaboration of this exceptionally precise watch. The caliber RM031 is outfitted with an AP direct-impulse escapement. Developed by APR&P for Audemars Piguet , this new escapement symbolizes a combination of a detent escapement and a Swiss anchor escapement. The AP escapement provides an enhanced chronometric result thanks to the straight action of the escapement wheel on the balance wheel in distinction to a Swiss anchor escapement in which the anchor acts directly on the escape wheel. To ensure the exceptional transmission of the power released by the double barrels, all the wheels of the movement have been optimized by a precise profile or the teeth with a pressure angle of 20°. This feature, inspired by automobile transmissions, creates a long, continuous transfer of power. 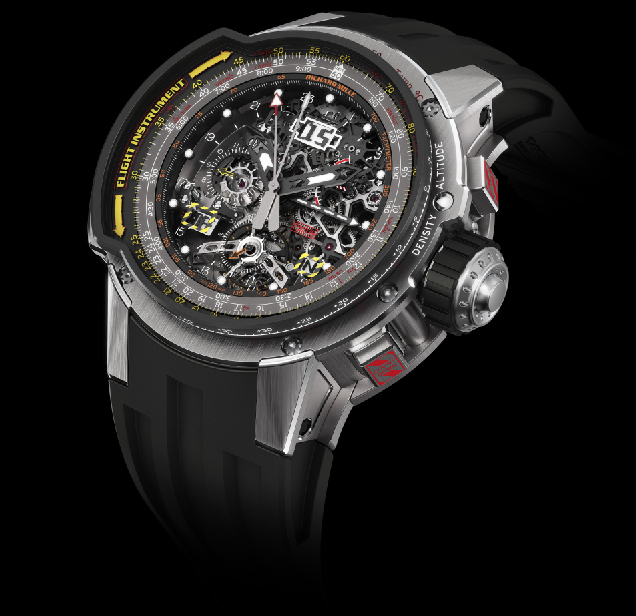 Aviation and aeronautics have always been the base of motivation for Richard Mille. To discover these themes in complex depth, Richard Mille created a caliber designed for flight navigation. This complete and technically smart instrument is an ultra-modern appreciation of an essential piece of equipment used by every professional pilot. It also replicates the materials and visual codes used in the aviation industry. The RM 039 AVIATION E6-B exhibits much of the same information presented by the famous E6-B flight computer, which was created in the United States by Naval Lieutenant Philip Dalton during the 1930s. This round slide rule, included into the bidirectional rotating bezel, can be used to read off and calculate fuel burn, flight times, ground speed, density altitude or wind correction, as well as a quick conversion of units of measurement (Naut/KM/Gallons/Liters/Feet/KG/LBS). The RM 039 tourbillion caliber is also equipped with a UTC hand, a countdown mode, an immense date at 12 o’clock and a function selector. The tourbillion movement drives a flyback chronograph featuring an elite design. This complication offers pilots a fast, practical device for measuring a series of successive elapsed times when piloting through separate marker points. The flyback chronograph function combined with the E6-B flight computer brings the possibility of real time measurement to its functionality and applications. By fusing all these functions in the RM 039, Richard Mille has extended the applications of the E6-B slide rule and turned it into an instrument that is better suited for any pilot’s needs. 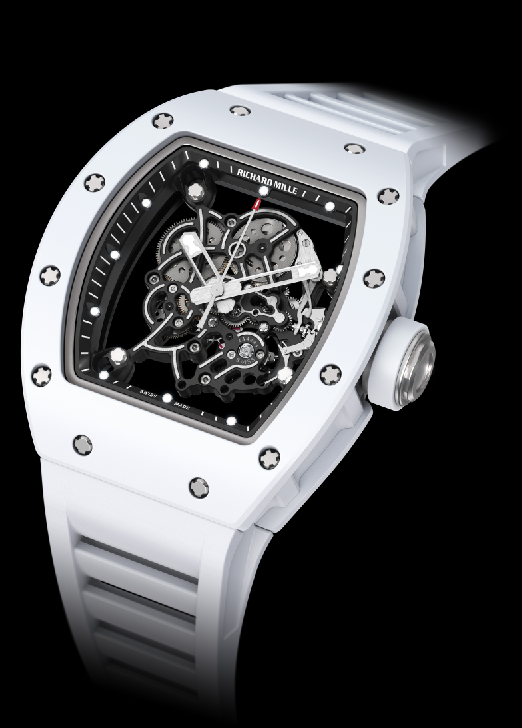 The new RM 055 Bubba Watson creation was inspired by the RM 038 Bubba Watson tourbillion watch released in 2011. Its mechanical movement in grade 5 titanium displays extreme skeletonization, with a PVD- and Titalyt® treated base plate and bridges. This arrangement offers the whole structure optimum rigidity and outstanding surface flatness and finish, essential features for the perfect functioning of gear train. The caliber RMUL2 is thus capable of withstanding accelerations of over 500-G’s. The movement is prepared with a variable-inertia balance wheel that guarantees reliability in the event of an impact and during assembly and dismantling, thus improving the long-term accuracy of the timepiece. The regulator index has been removed, and a more accurate and repeatable inertia modification is possible because of four small adjustable weights located directly on the balance wheel. The double barrel mechanism helps to expand and equalize long-term torque stability: This is achieved by dispersing the stored energy within two winding barrels, equalizing torque as well as reducing pressure and friction on the bearings and pivots, resulting in enhanced long-term operation.