The MB&F MusicMachine3 Has Landed

With Comic-Con well under-way in San Diego, and every science fiction fan waiting impatiently for the release of The Force Awakens, MB&F’s Maximilian Busser is joining the Star Wars conversation the only way he knows how. With a mechanical tribute to one of his favorite films. 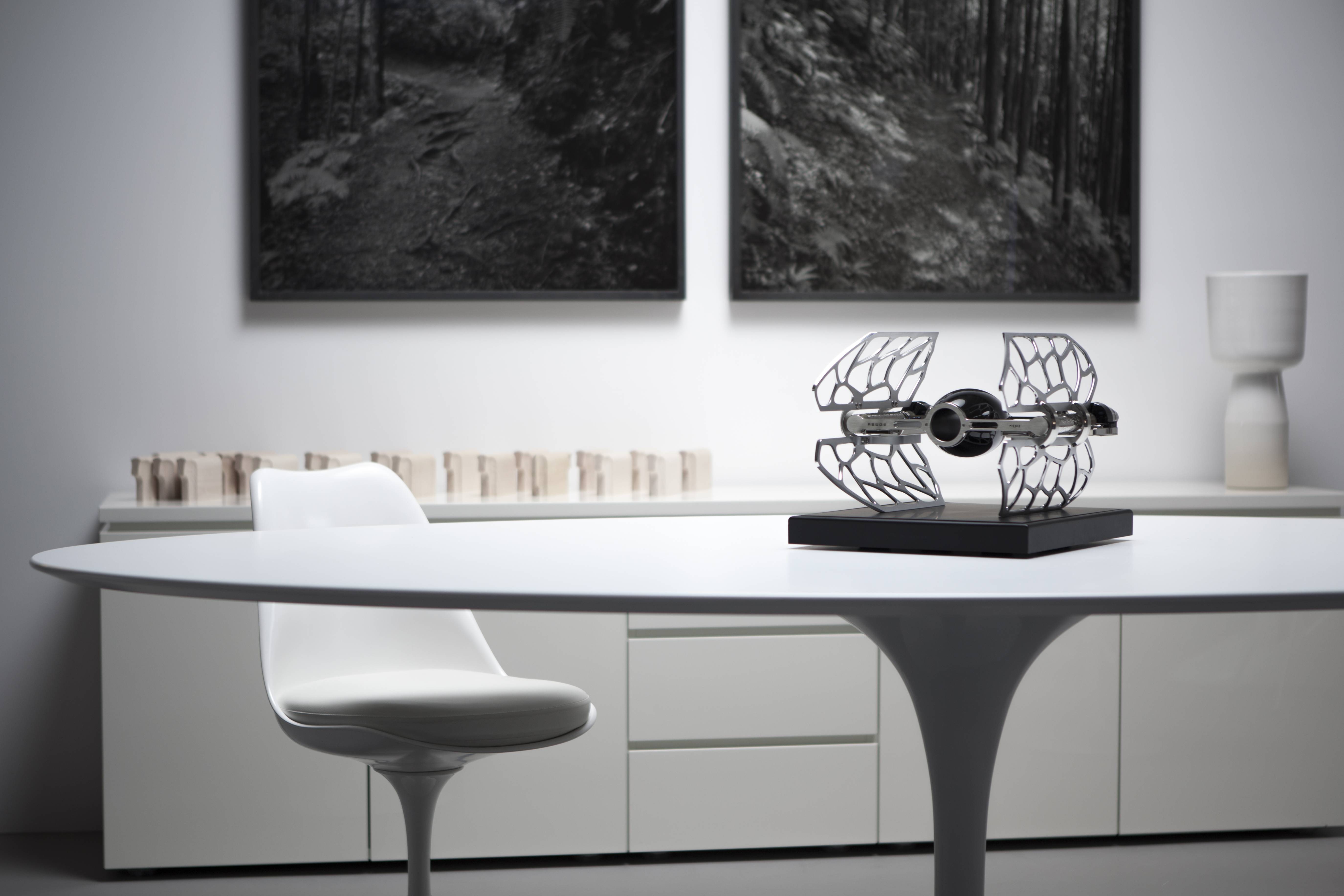 The self-confessed Star Wars fan is currently celebrating the 10th anniversary of his independent watch brand, and has decided to celebrate by completing his own trilogy of ultra-modern and highly stylized musical machines. While they do not display the time, they are of course mechanical, and wound up like a watch, and their components are finely finished by hand, similar to the brand’s high-end watch movements. 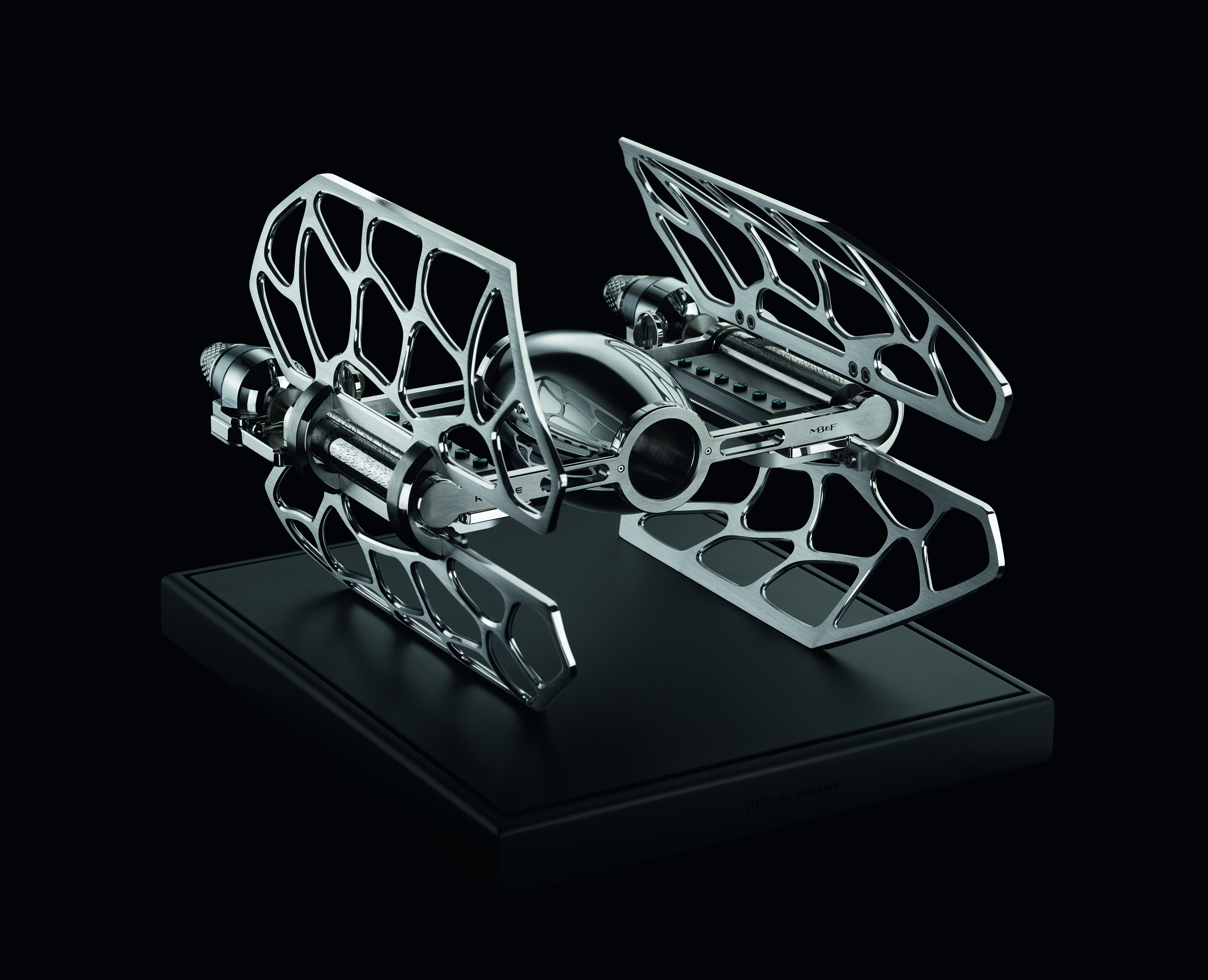 After two successful collaborations with REUGE, the premier manufacturer of music boxes, MB&F is releasing the MusicMachine 3 (MM3), and this highly limited music box, appears to have flown straight our of the Star Wars universe. 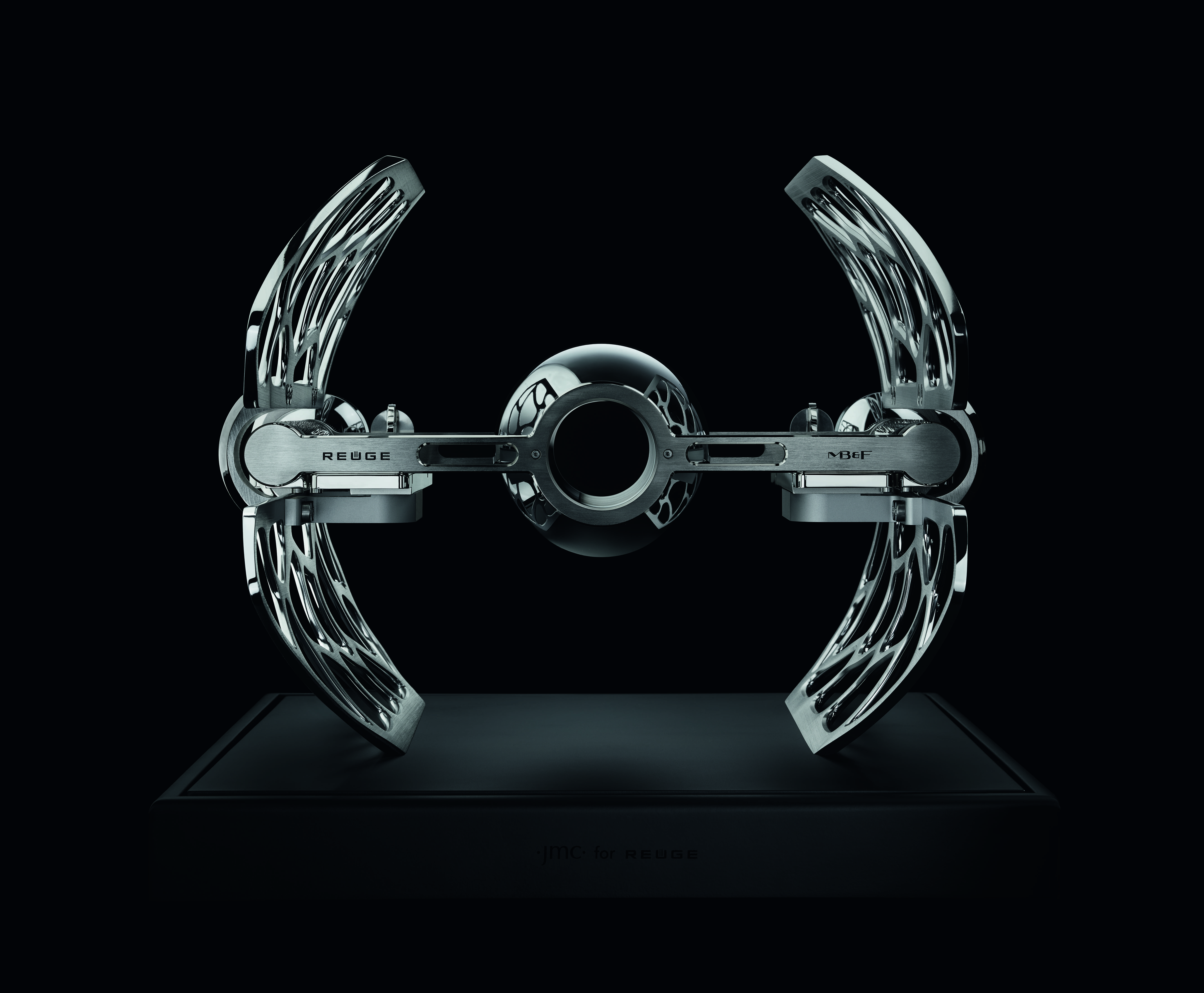 This time, MB&F’s mechanical wonder comes in the shape of what looks like the Imperial fleet’s TIE fighters (the brand’s owner does not hide the fact he enjoys the anti-hero archetype). The Swiss watchmaker was 10 years old when he first saw Star Wars in 1977, and he’s been unable to shake off John Williams’ iconic score. 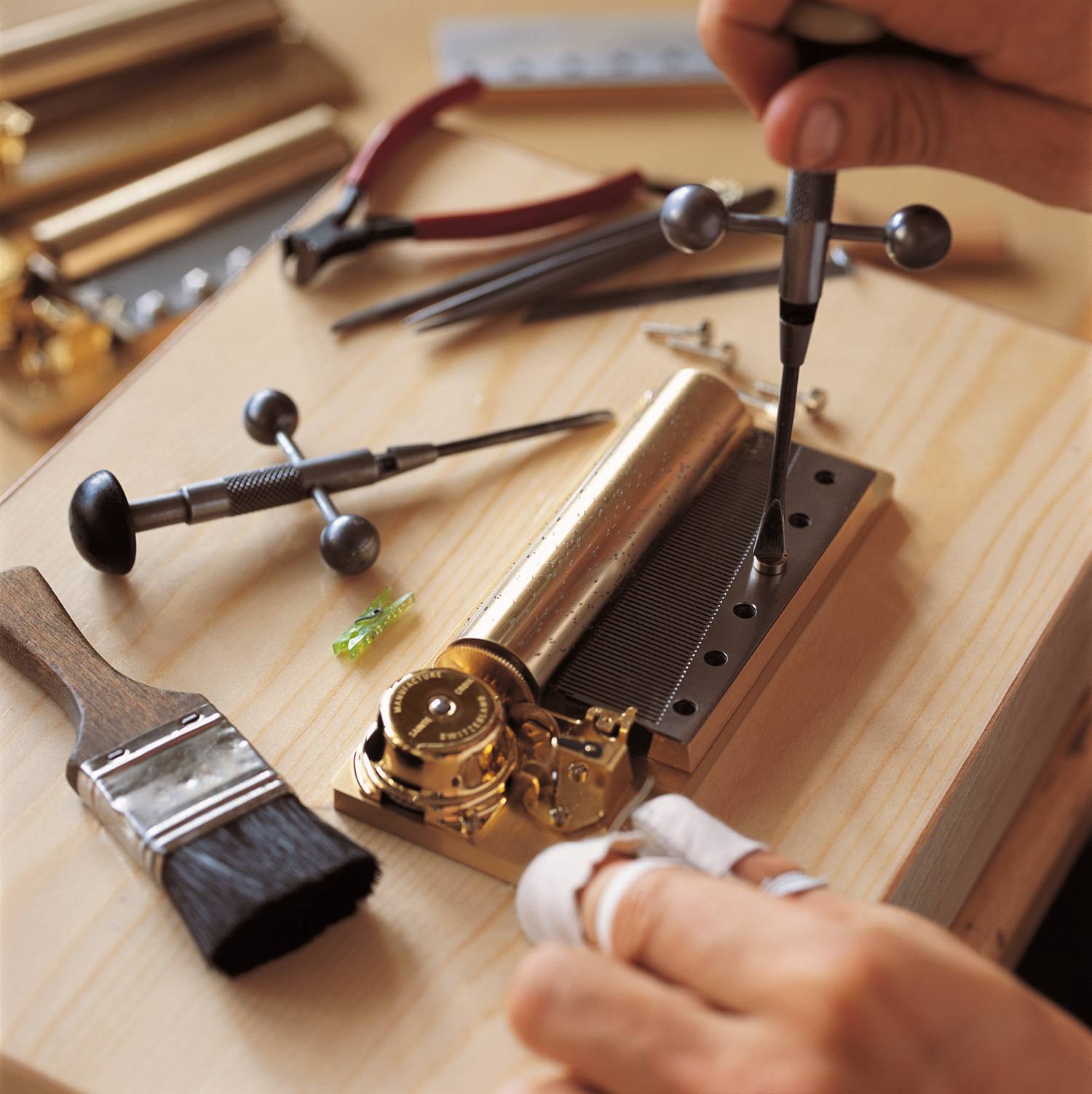 Thanks to REUGE, the melody is now part of the MB&F’s repertoire. The music box manufacturer has built two revolving cylinders that pluck a selection of 72 notes on a steel comb to reproduce the Star Wars theme song. 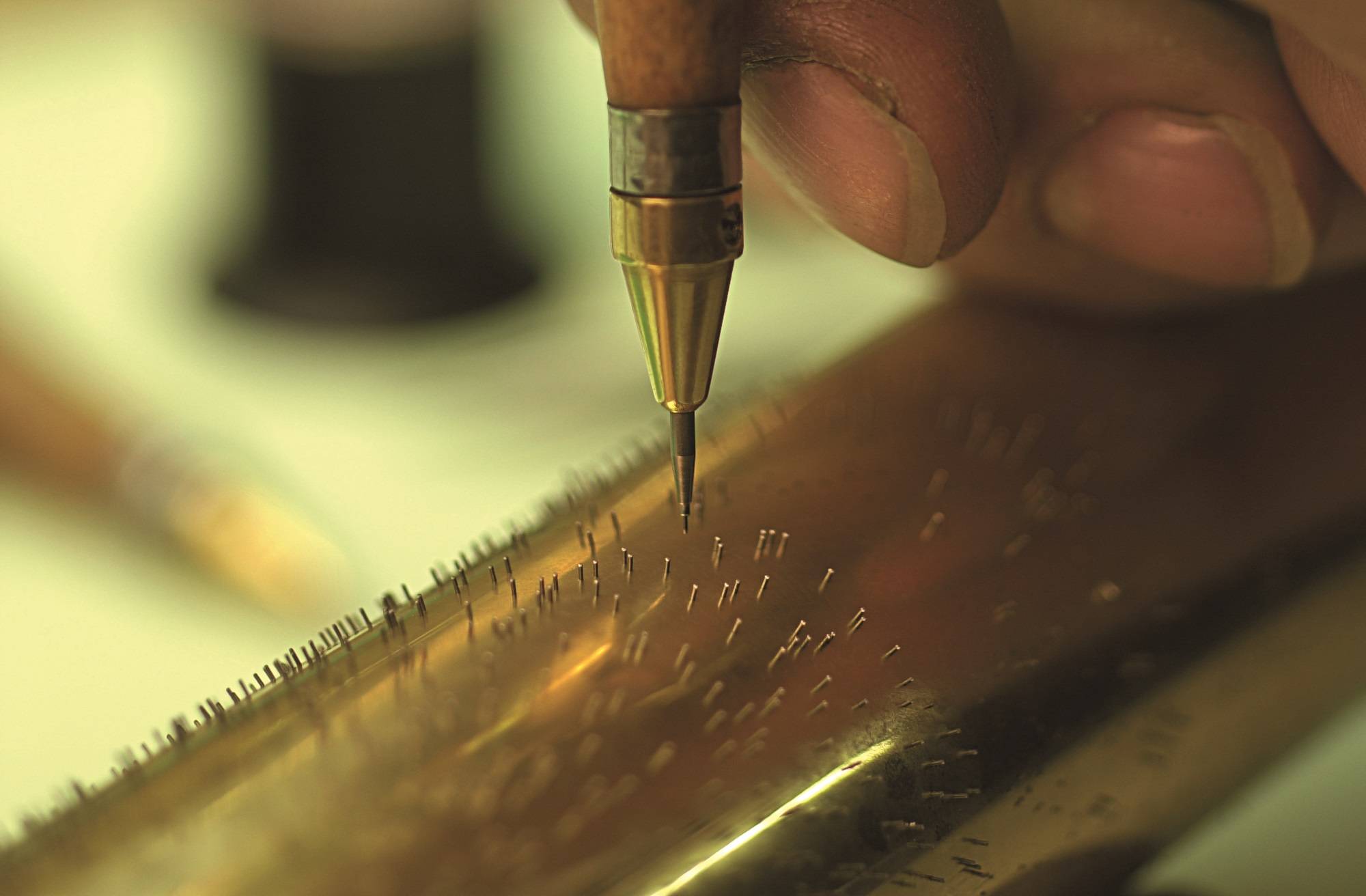 The sound is then propagated from the combs to the amplifying resonant base through the machine’s highly sculptural wings, which also support and protect the dual music cylinders. The sound is bold, the quality impressive, and the theme song full of nostalgia.

But while the Star Wars canon is in every nook and cranny of MB&F’s latest musical spaceship, the MM3 actually plays themes from other movies as well, including Mission Impossible (1960), James Bond (1962), The Godfather (1972), Merry Christmas, Mr. Lawrence (1983), and The Persuaders (1971). Which may sound a little odd at first. But the design of the MM3 is so contemporary that it transcends the genre it’s inspired by. With the MM3, MB&F once again proves that serious watchmakers do not have to take themselves too seriously. All they need is the force.

MusicMachine3 is a limited edition of 99 pieces, with 33 pieces in a white finish, 33 in a black finish, and 33 in a chrome finish. Price Upon Request.

Photo Credit: MB&F. For more information, please visit the official MB&F website. Follow Haute Time on Instagram to catch all of the new releases as they happen.