This is Part 1 of my five part, Art Basel Miami Series; you can also follow these links for Part 2, and Part 3,  and Part 4.

Art Basel Miami is, quite frankly, the best week of the year to be in Miami. It’s the perfect combination of people, weather and art. With this year’s opening, during Art Basel Miami, of the new Herzog & De Meuron designed Perez Art Museum Miami (PAMM), and numerous other great activities on my calendar, I decided to have a little extra fun. I would mix three of my passions: my love of contemporary art with my love of watches and sports cars.

I knew I had to when things started to fall into place organically. First I get an email from my friends at Pagani. You see, I was at the Pagani factory four years ago meeting with Horacio after being introduced by a client, where I discussed the opening of the new PAMM Museum. My wife is on the PAMM Board of Trustees, and we suggested having the Pagani Huayra at the opening. Now Pagani contacted me with an offer I could not refuse; “We can loan you the Huayra for the week of Art Basel Miami, if you’re interested.” Next, at my house, during a trunk show with Italian designer Corto Moltedo, a plan was hatched. Seven days with several of my favorite watches, a Pagani Huayra, and Art Basel Miami, with all it has to offer, or at least all I can handle.

Art Conductor hosted a VIP dinner at Soho Beach House that served as the perfect kickoff for Art Basel this year, in honor of artist Hew Locke and the Fountainhead artist residency.  One of the most exciting artists featured at the opening of the new PAMM museum during Art Basel Miami is Hew Locke, with an entire gallery dedicated to his work. Hew Locke’s exhibit consists of dozens of scaled-down replicas of ships suspended from the ceiling, creating the impression of a massive exodus taking place.

Given Miami’s history, this exhibit is not only breathtaking, but also historically poignant as well.

What better to pair with this event than one of the watch brands best known for its nautical past, Panerai, and one of my favorite watches, the PAM317 Luminor 1950 Chrono Monopulsante 8 days GMT Ceramica. 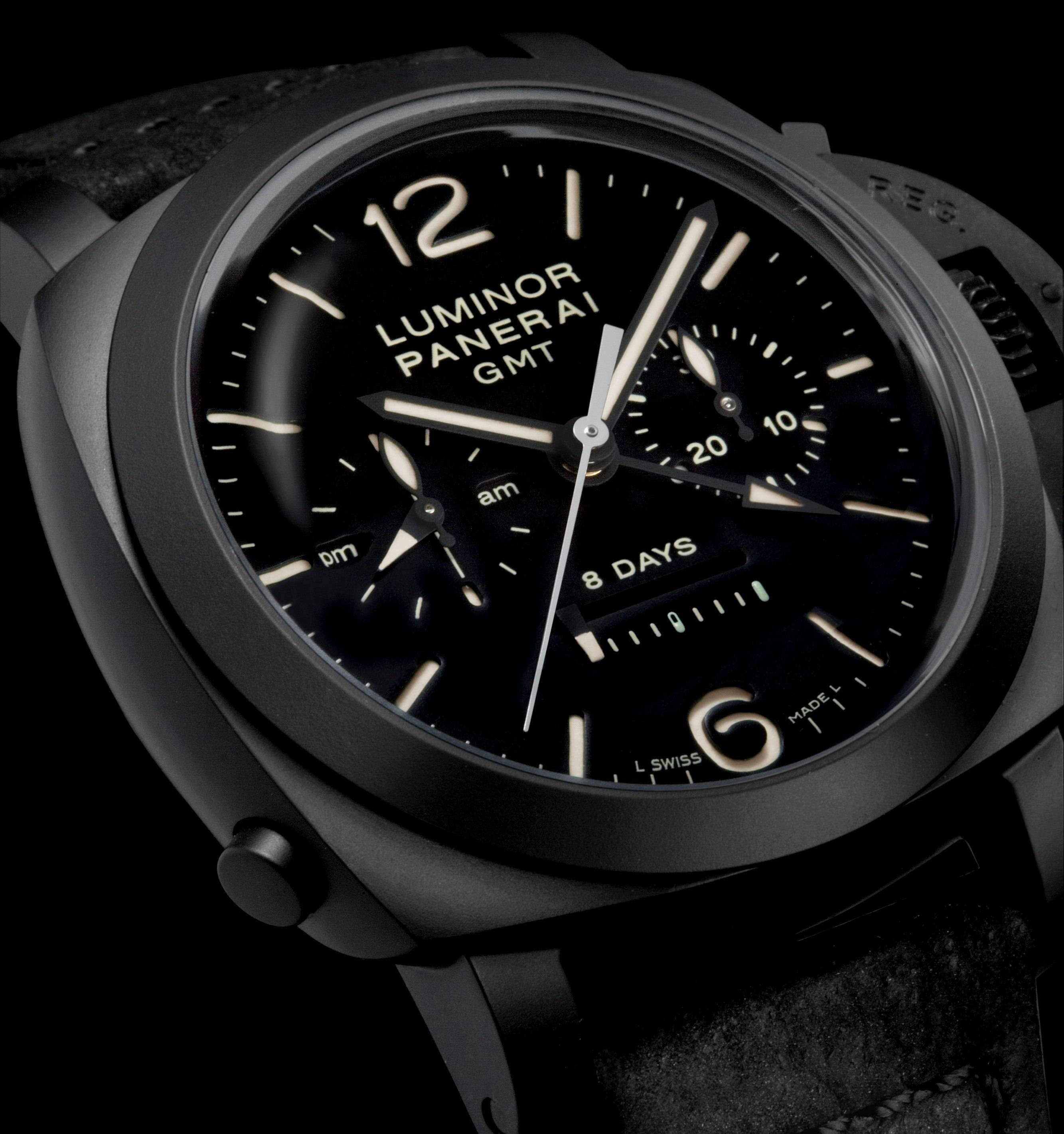 The 44mm case is simply stunning and very contemporary in matte ceramic.  Perfectly paired with a white on black sandwich dial, it also has a single-button chronograph function and a second time zone (GMT) with day/night indicator. With 8 days of power reserve, I knew I would not have to rewind until Art Basel was over. And knowing the week that lay ahead, I it was best to leave nothing to chance.

My ride was waiting, and I have to admit, I was a little nervous as I took the wheel. 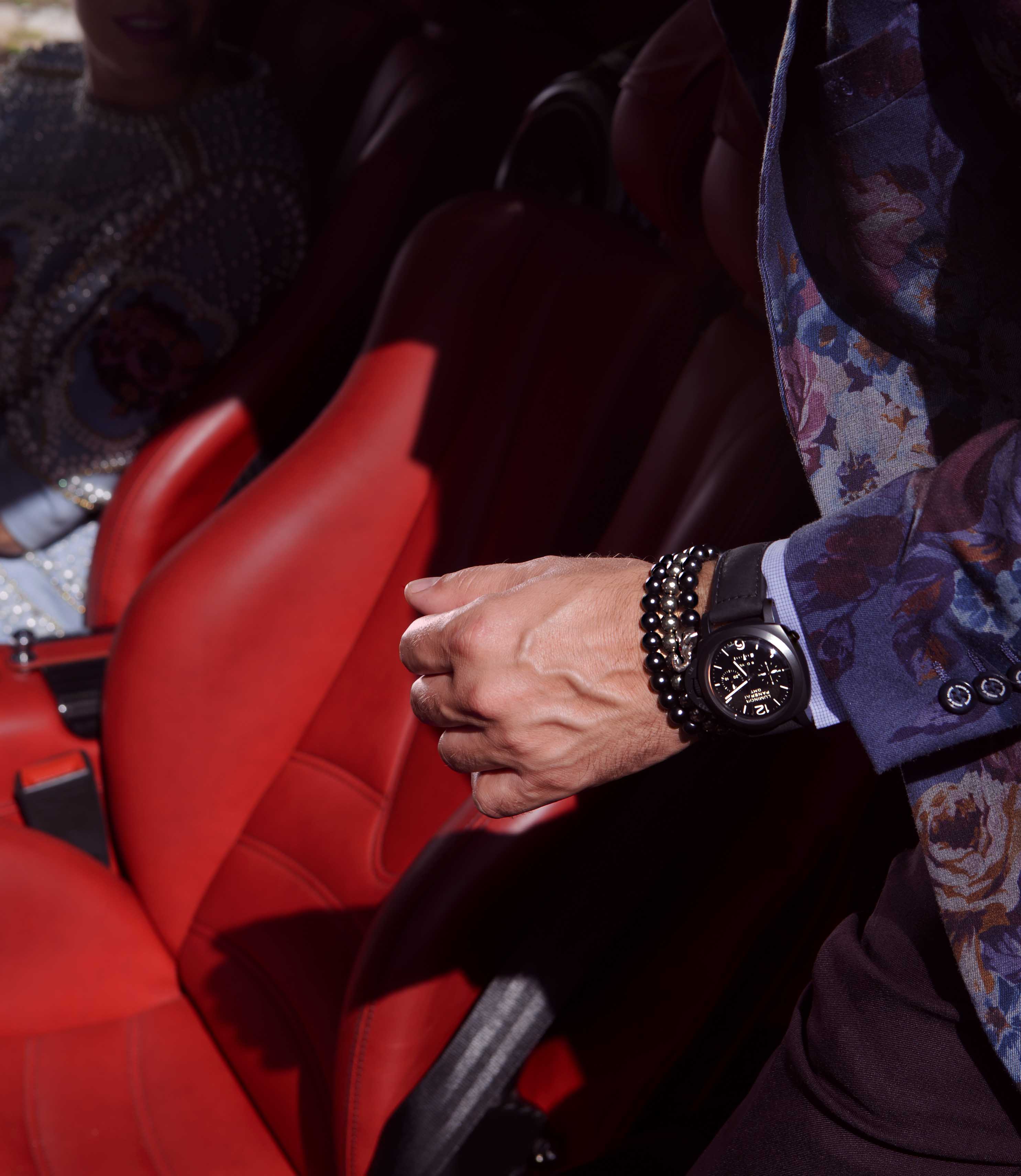 At $1.7 Million, this was no ordinary exotic sports car. Immediately, realizing the ridiculousness of such a statement to anyone residing outside of Miami, I must explain.  I have driven Maseratis, Ferraris and Lamborghinis before, but this was actually the first time I had taken the wheel of a Pagani Huayra, of which only 24 currently exist in the world.  With a little over 1,000 miles on the speedometer, as I stepped in it still had the smell of a new, fine leather briefcase. 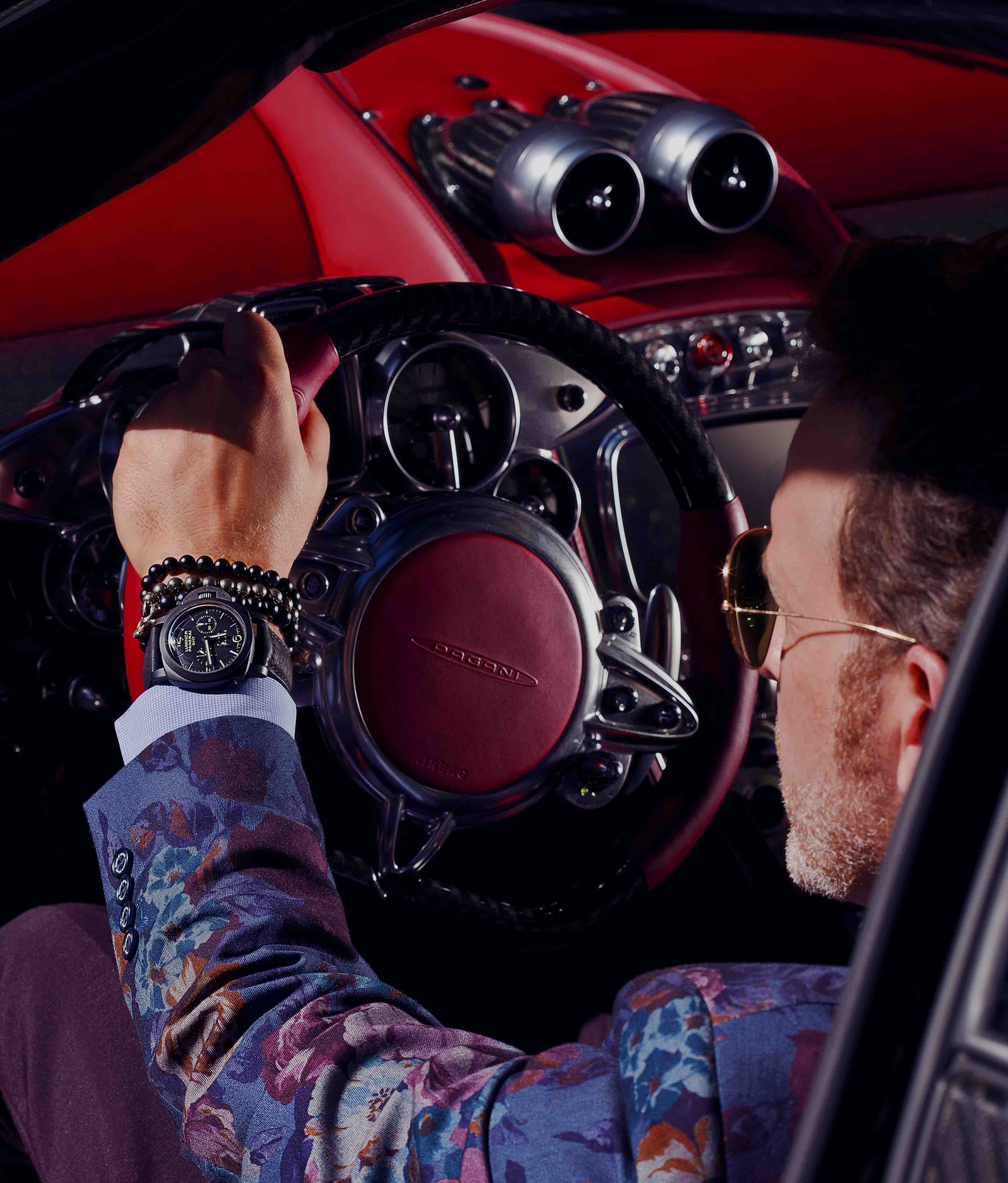 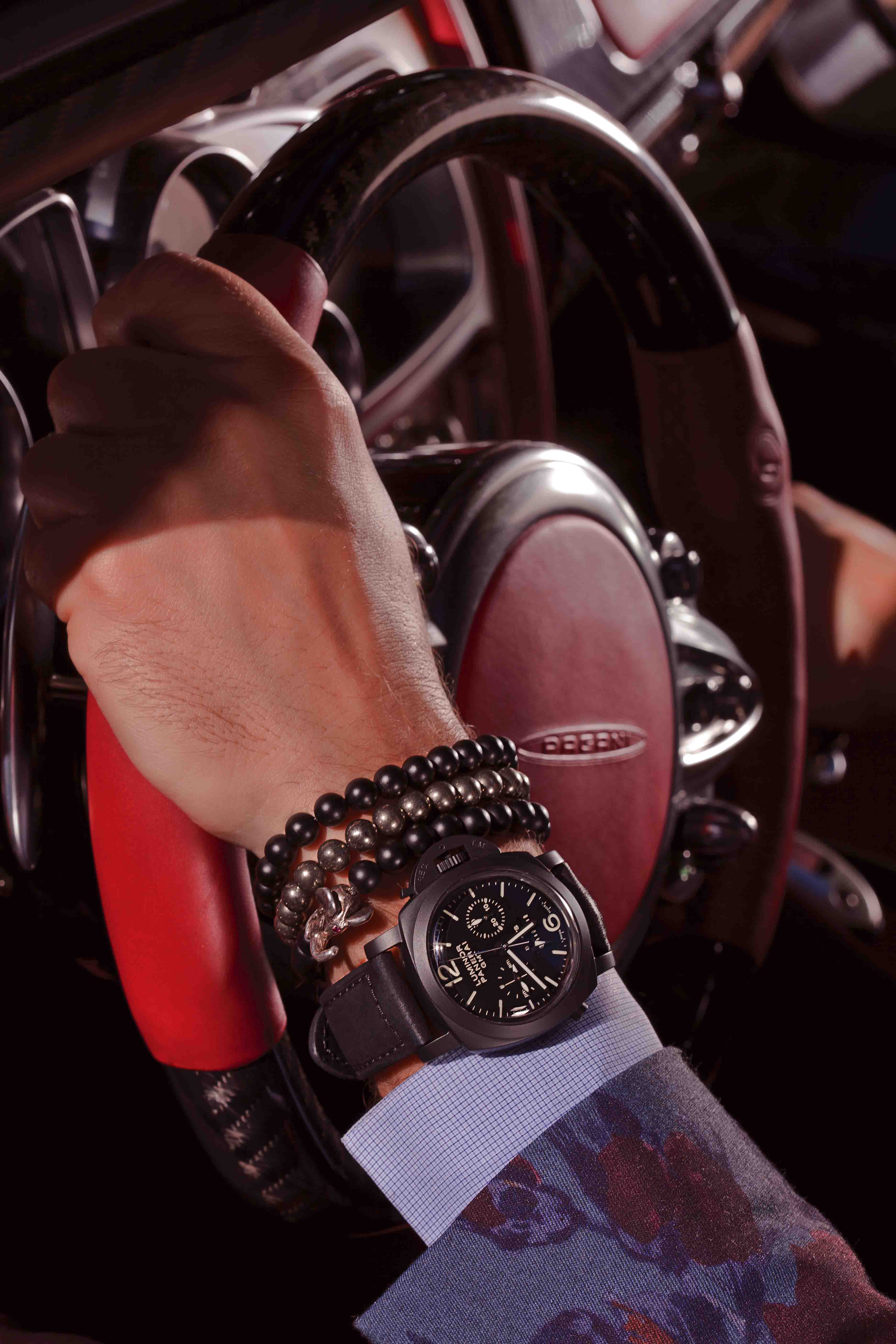 Even the floor mats are leather, and the metal knobs and dials had all been machined and polished to precision.

My drive to Soho Beach House was unfortunately, much too short, but a fabulous party awaited and the host would not allow if I was late, especially since she is my wife. 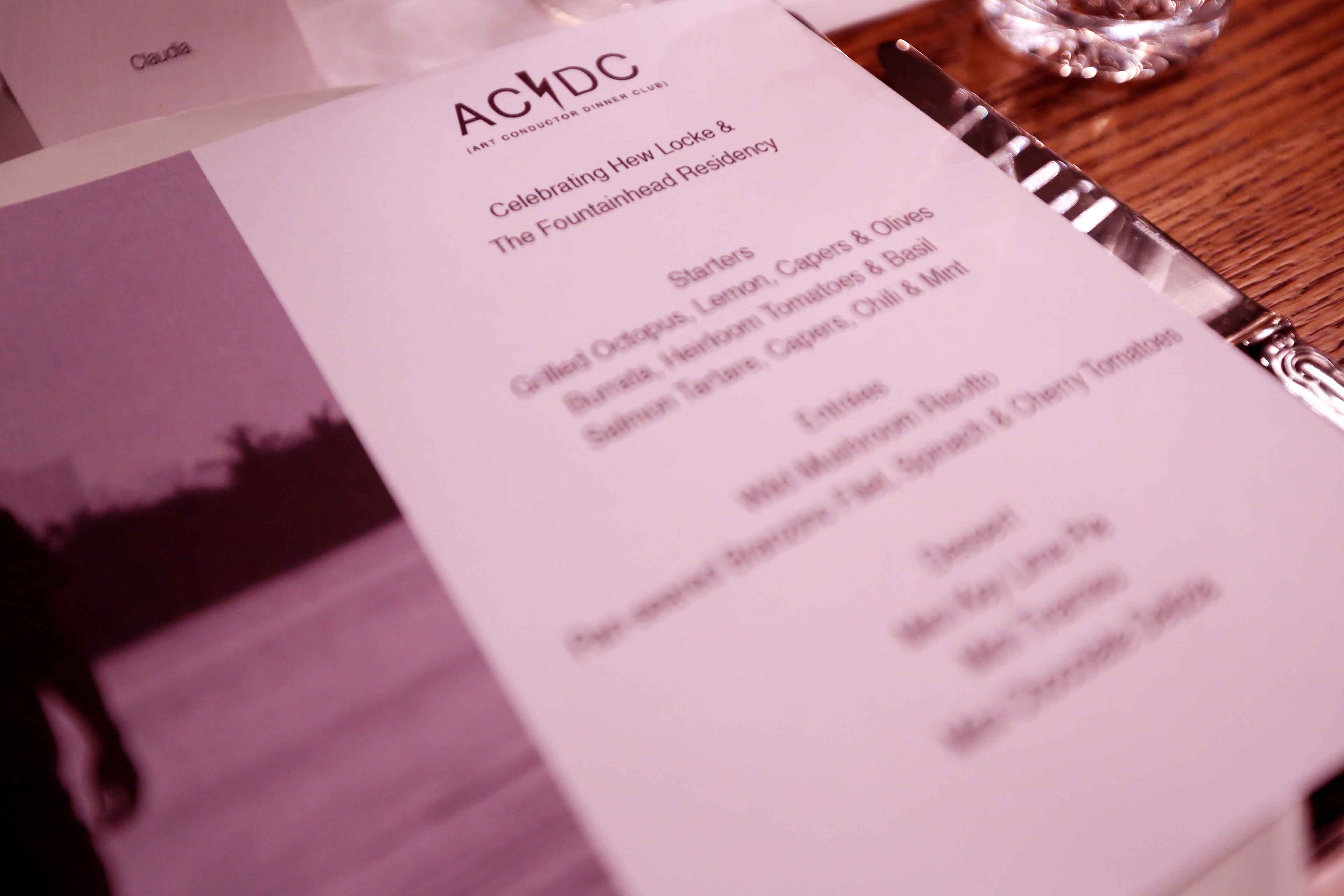 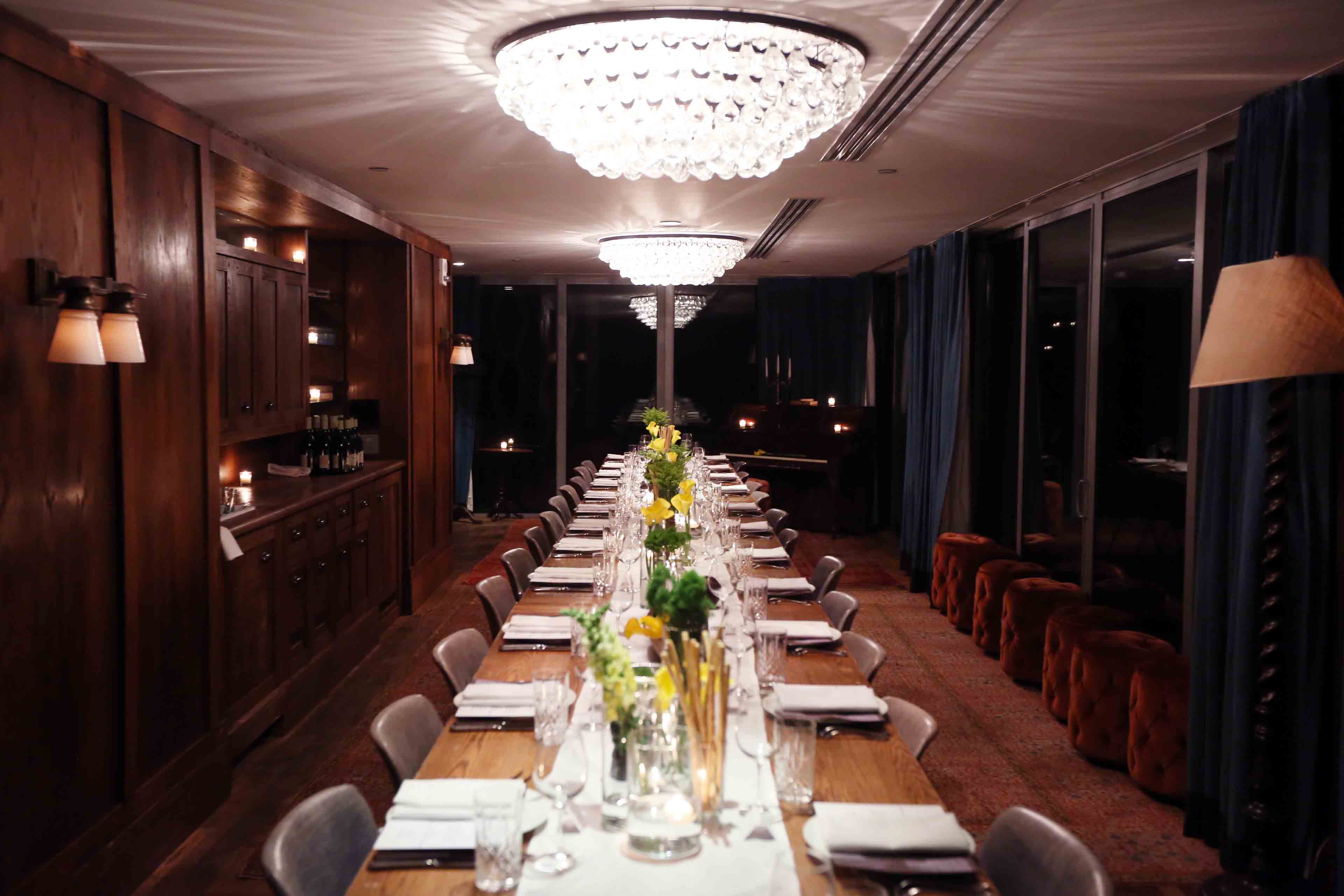 Guest in attendance included the director of Miami’s MOCA museum, PAMM’s Capital Campaign Manager, art collectors, the founders of the Fountainhead artist residency, the Hales Gallery and of course the guest of honor, artist Hew Locke and his wife. 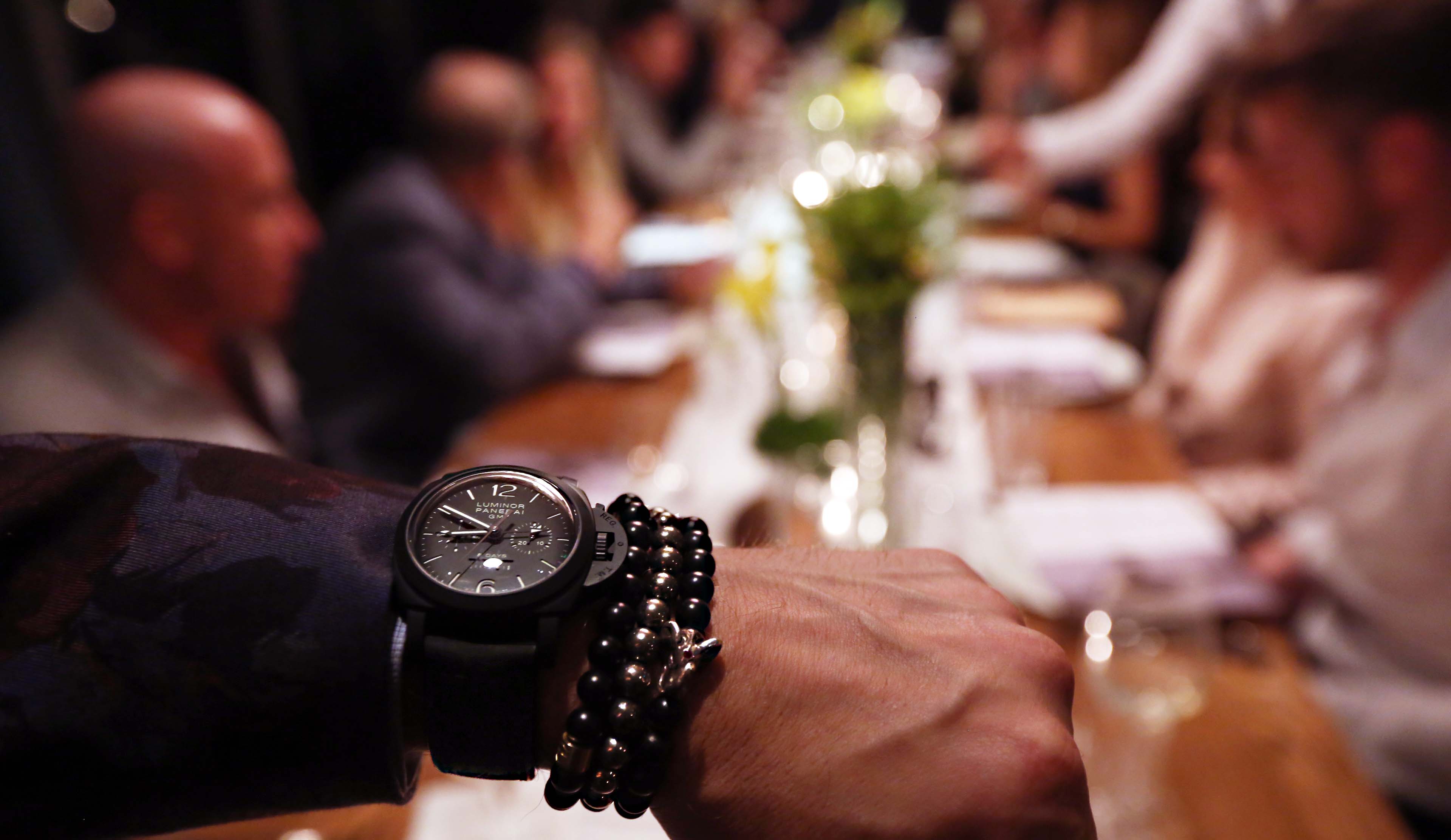 By the time we quieted down for a toast, Hew Locke was having a grand time. 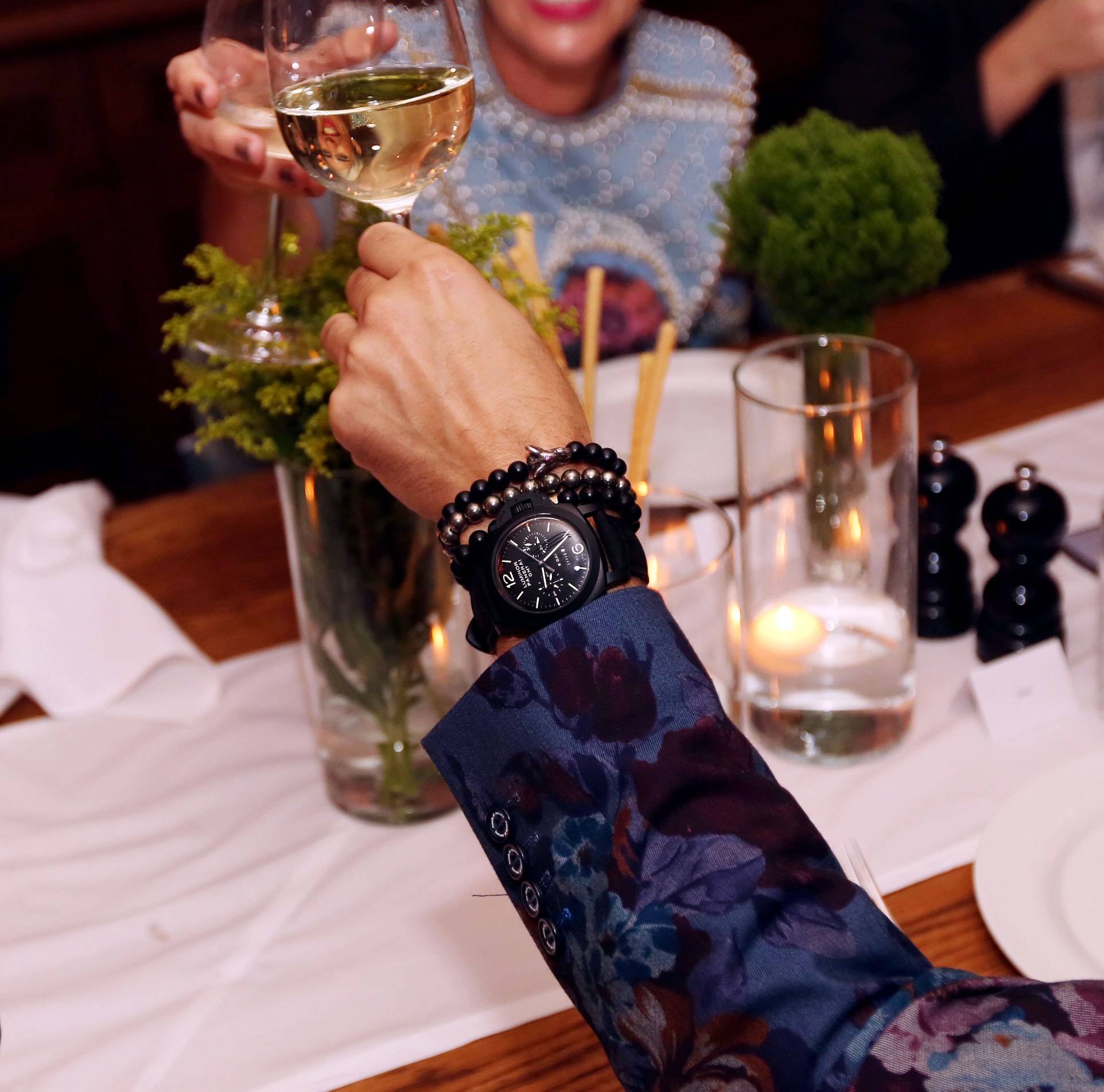 Seated across from him, we had the chance to speak at length; and he is not just a gifted artist, but also very intellectually astute, a true thinker and this is reflected in his art.   The Hew Locke exhibit at PAMM has been wildly acclaimed as one of the highlights of this year’s Art Basel Miami, and you can still see it, as it runs through May 25, 2014.

Next, the dinner party, including Hew headed downstairs to the grand opening of the Soho Beach House luxury tent, literally on the beach, steps from the water.  This tent, which is fit for a sultan, exists for only this week (at a reported cost of over $200,000), and in the 2 years of its existence during Art Basel Miami is already the stuff of legend; hosting impossible to attend parties, art aficionados, bon vivants and a year’s worth of pent-up excitement for what is to come. 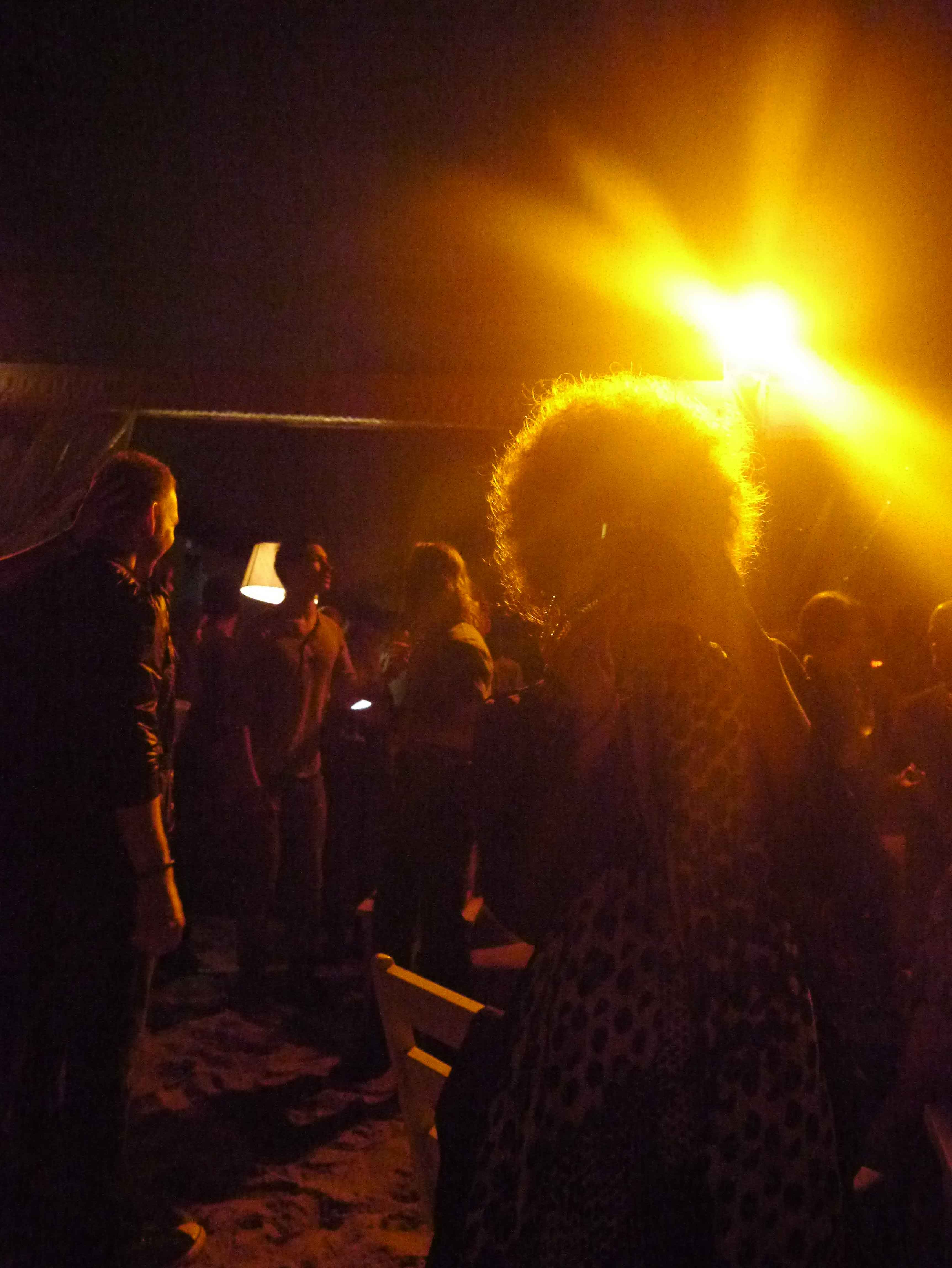 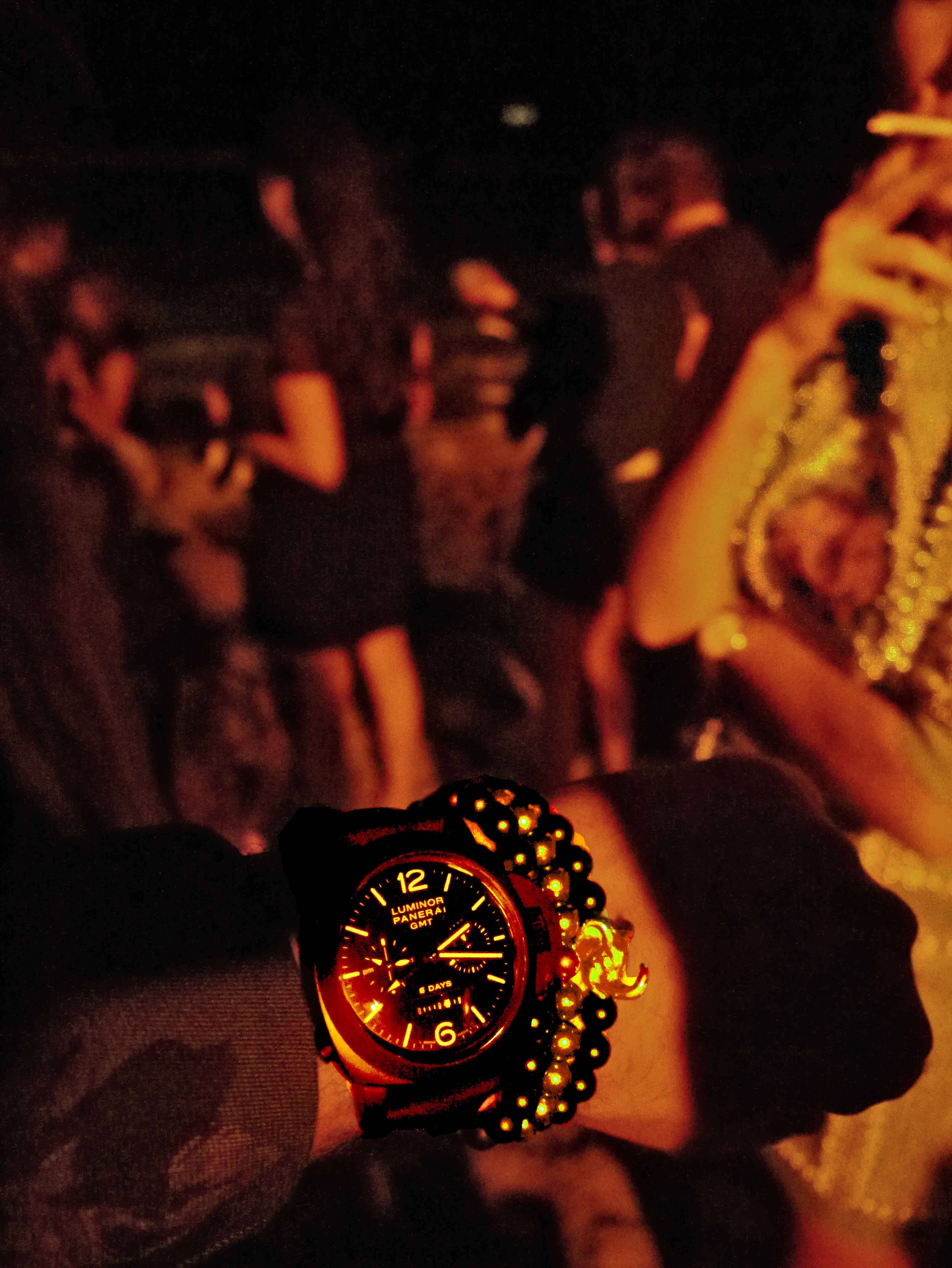 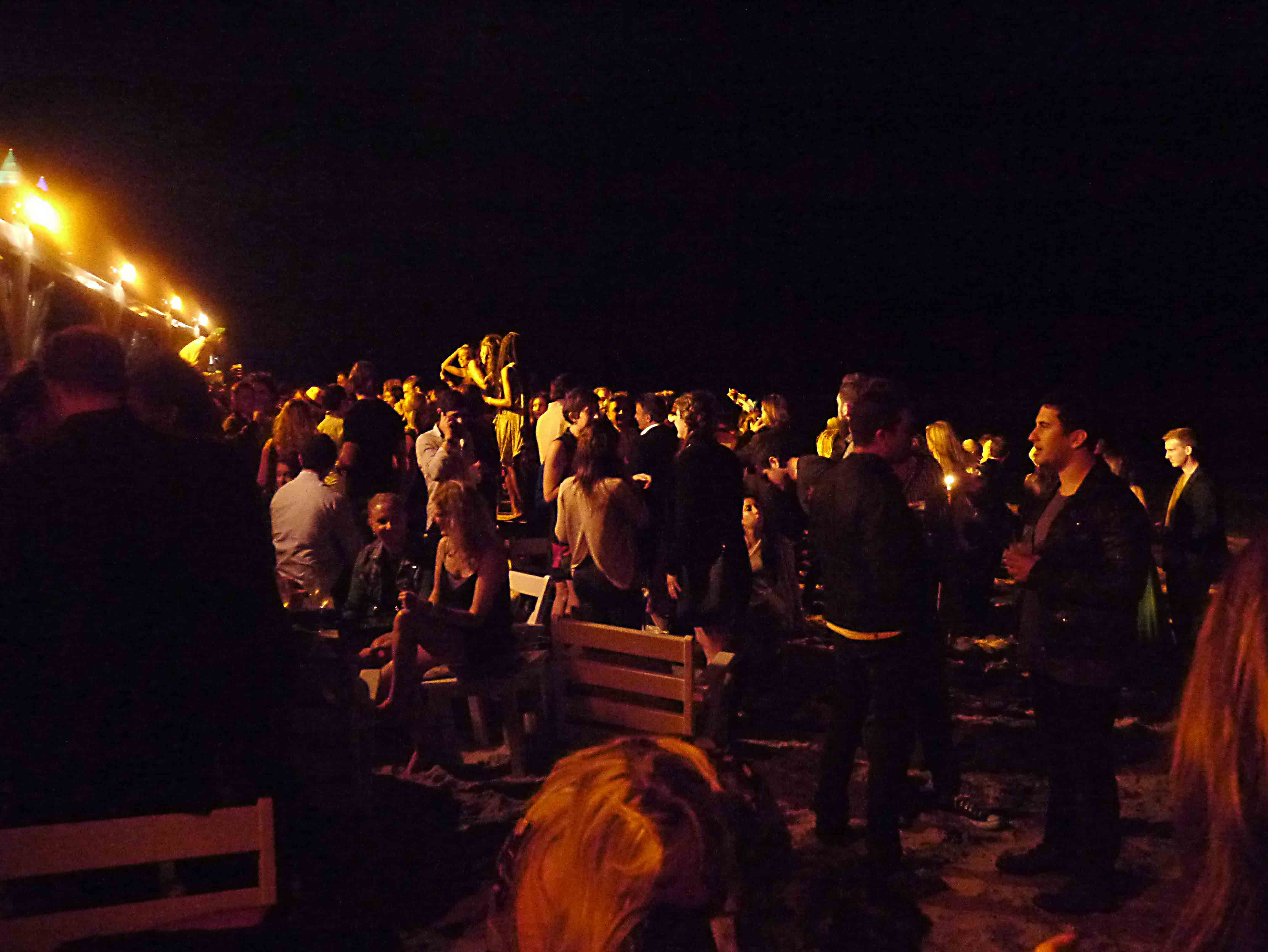 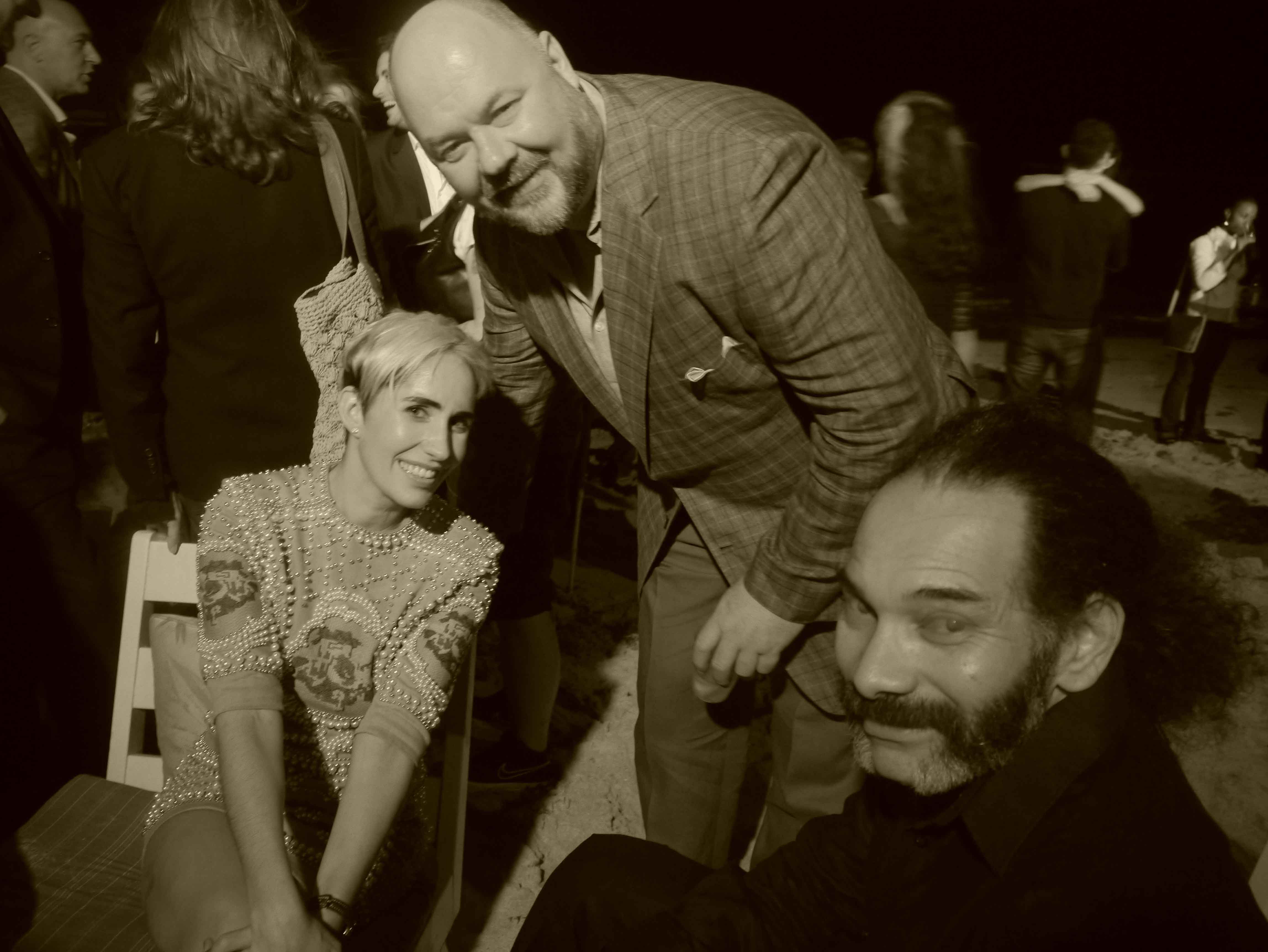 A great start to what is sure to be a great week, and I still have a Pagani waiting to take me home.

Shout-out to my friends at shopbasico.com for their great sport coats and espiritutara.com for my bracelets.