Among the many impressive introductions in Basel this year were some brilliant timepieces launched by Louis Vuitton. Die hard watchonistas will say, ‘What? A fashion brand?’ to which I say, no, a couture brand. Louis Vuitton is a luxury fashion and leather goods company, but it is also watchmaker – having acquired high watchmaking workshop La Fabrique du Temps three years ago –  and in Basel this year, they proved once again how serious they are about watchmaking. First with a new movement for ladies, an automatic tourbillon built especially for women’s watches, and with a world premiere split-seconds chronograph designed especially for yacht racers.

The movement of the Tambour Monogram Tourbillon employs a micro-rotor, not for reasons of compacting the movement in order to create a sleeker watch, as Patek Philippe does, but in order to provide an unobstructed view of the tourbillon cage. Positioned in the traditional space at 6 o’clock, the cage is visible from both front and back through sapphire crystals. The micro rotor is strategically placed at the 12 o’clock position so that when it swings down, it doesn’t obstruct the full view of the tourbillon from the back, as a traditionally positioned oscillating weight would. The design of the cage and bridge are also significant. Each represents two petals of the Louis Vuitton floral motif (called the Lozine). Together, they show the full flower once every minute when the rotating tourbillon cage aligns crossways with the bridge. The result is a tourbillon mechanism that serves as a mobile motif, a secondary spectacle beyond the beauty of the tourbillon itself: Genius.

In Basel, I spoke with Hamdi Chatti, the brand’s vice-president of watches (and a master watchmaker), who explained, “First we thought, what is the most beautiful complication? Then we thought, how can we make this interesting for women, and at the same time pay tribute to the spirit of Louis Vuitton? Some people have said that women are not interested in complicated watches, but that is not the problem. The problem is that watchmakers have not understood how to make complications interesting for women.” Louis Vuitton has obviously cracked the code. 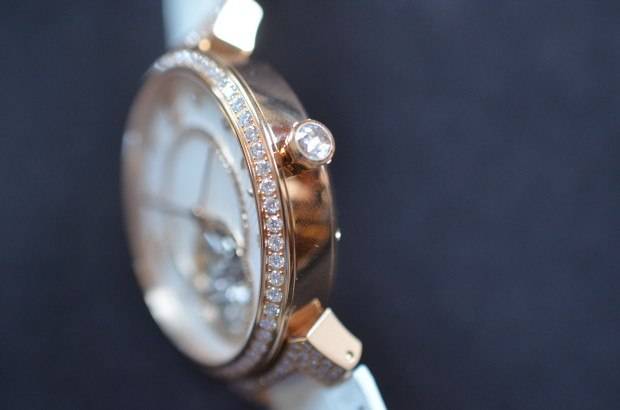 The second major introduction at Louis Vuitton is the Tambour Twin Chrono, a world first that will win the hearts of yacht racers. It’s a split-seconds chronograph with separate subdials (driven by separate balances and escapements) to display the time of each of two boats. A third drives a differential display to track the time difference between the two boats. Most regatta chronos are geared to the 10-minute countdown at the start of the race, when boats have to manouver to the start line. This one pays particular attention to the finish. Louis Vuitton is the sponsor of the Challenger races for the America’s cup, and this watch is one of several that are geared toward the event, called the Louis Vuitton Cup. 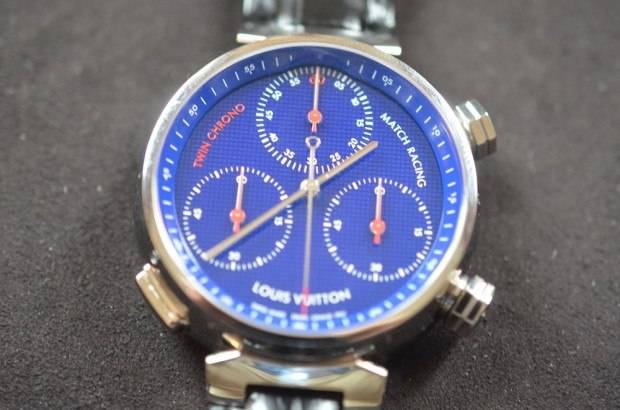 It is a 437-component movement with a three-layer column wheel. and four balance wheels. It was four years in development, and will be produced in a limited edition of 30 pieces. 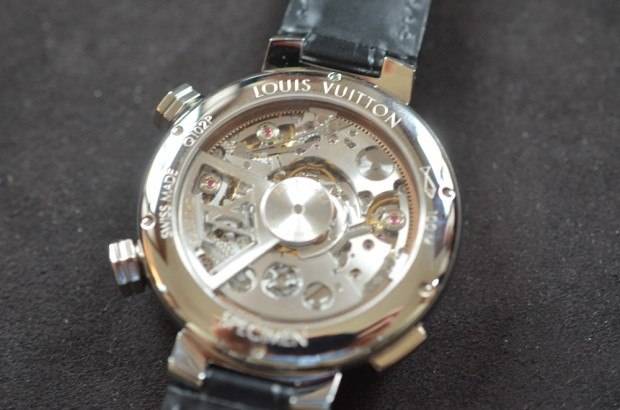 At BaselWorld, Haute Time had the privilege of seeing the Louis Vuitton watchmakers at work on the Tambour Twin Chrono. Check out our exclusive gallery:

Building Baselworld: How To Put Together The World’s Largest Watch Fair