Five Lessons From Audemars Piguet: Remember Who You Are, And Stay True To Yourself (Part 1)

Identity has always been the most important value in the watchmaking industry. The reason brands point towards their heritage when presenting a new watch is that their past defines them. Here’s why: 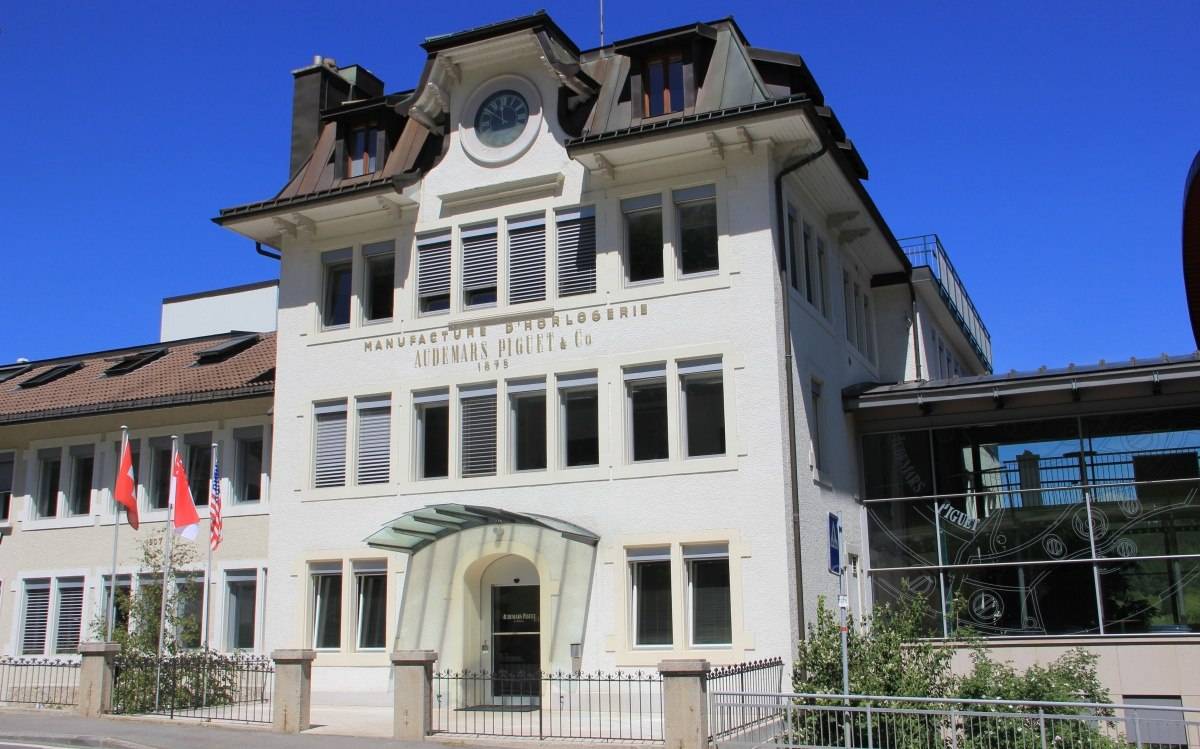 If there was one moment during our tour of the Audemars Piguet Manufacture that encompassed the identity of the brand, it’s when we stood on the second floor of the original building, looking out of the same windows Jules Louis Audemars and Edward Auguste Piguet once faced (pictured below), back in 1875. In front of us, the same Swiss hill, lined with wooden cottages and pine trees that the founders would have contemplated while working on their first watches. It’s a view that Audemars Piguet has protected throughout the years. 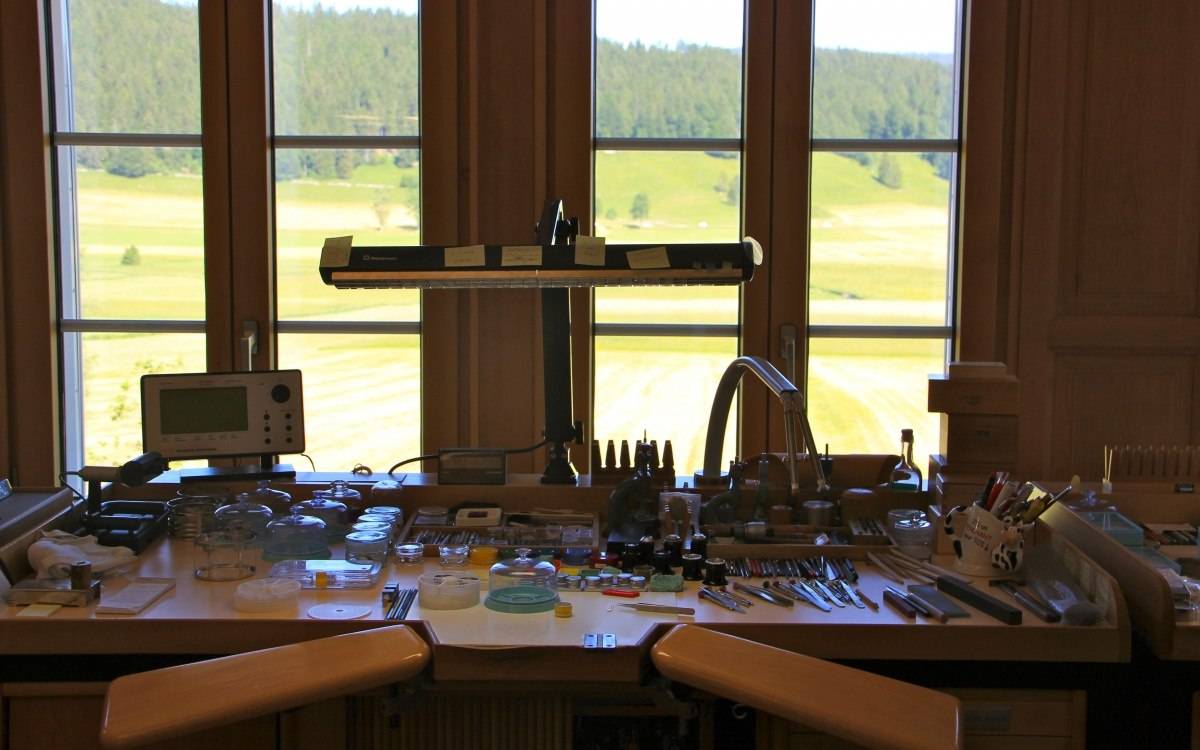 The brand is also protecting its timekeeping heritage. The man in charge of that mission is Audemars Piguet’s Historian, and industry expert, Michael Friedman (pictured below, right), who showed us some of the most historically important timepieces ever created by the brand, together with Sebastian Vivas, the Director of the Museum & Heritage at Audemars Piguet (pictured below, left).  Audemars Piguet brought Mr. Friedman in the team to hunt for its most rare timepieces, and he gave Haute Time an exclusive look at some of the collection amassed. 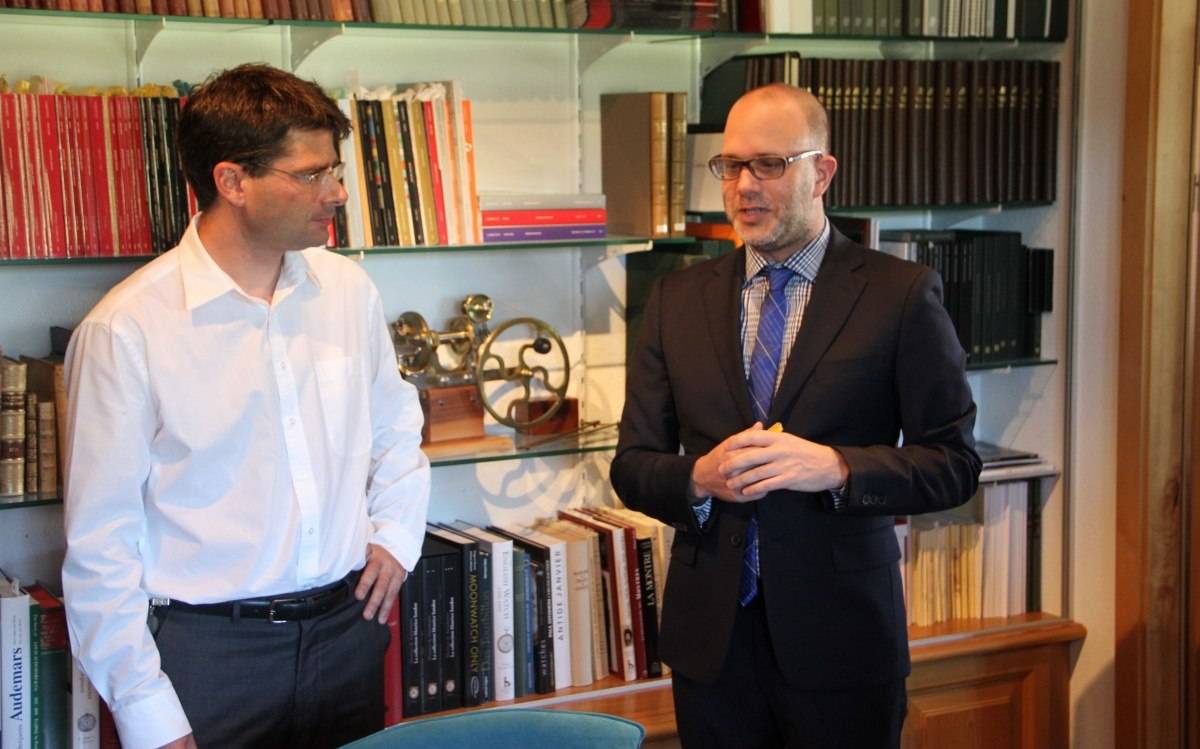 On display that morning, the “rarest watch ever made by Audemars Piguet,” according to Mr. Friedman. “It was our first perpetual calendar wristwatch. We made three examples in 1955 and six examples in 1957 – a total of only 9,” said Mr. Friedman. The watch (pictured below) is from the second group. “It was the first wristwatch made in a series to feature perpetual calendar with leap year indication, a very important feature of a perpetual.” 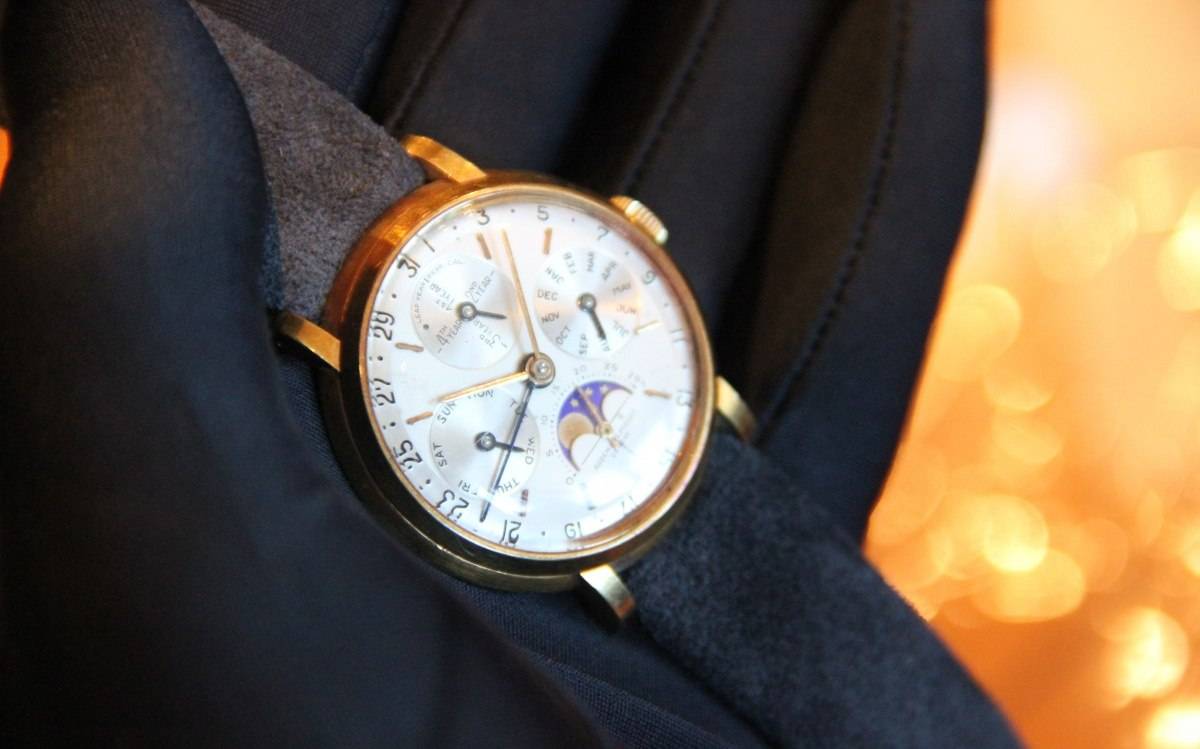 Next, Mr. Friedman presented a Triple calendar chronograph with phases of the moon (pictured below). The watch was made in 1941 from 18-carat yellow gold, and its age is given away by the lack thereof an important detail. “This was made before we introduced reference numbers,” said Mr. Friedman. “As such, the highly rare examples that feature these complications vary from one to the next, rendering each as a unique watch.” 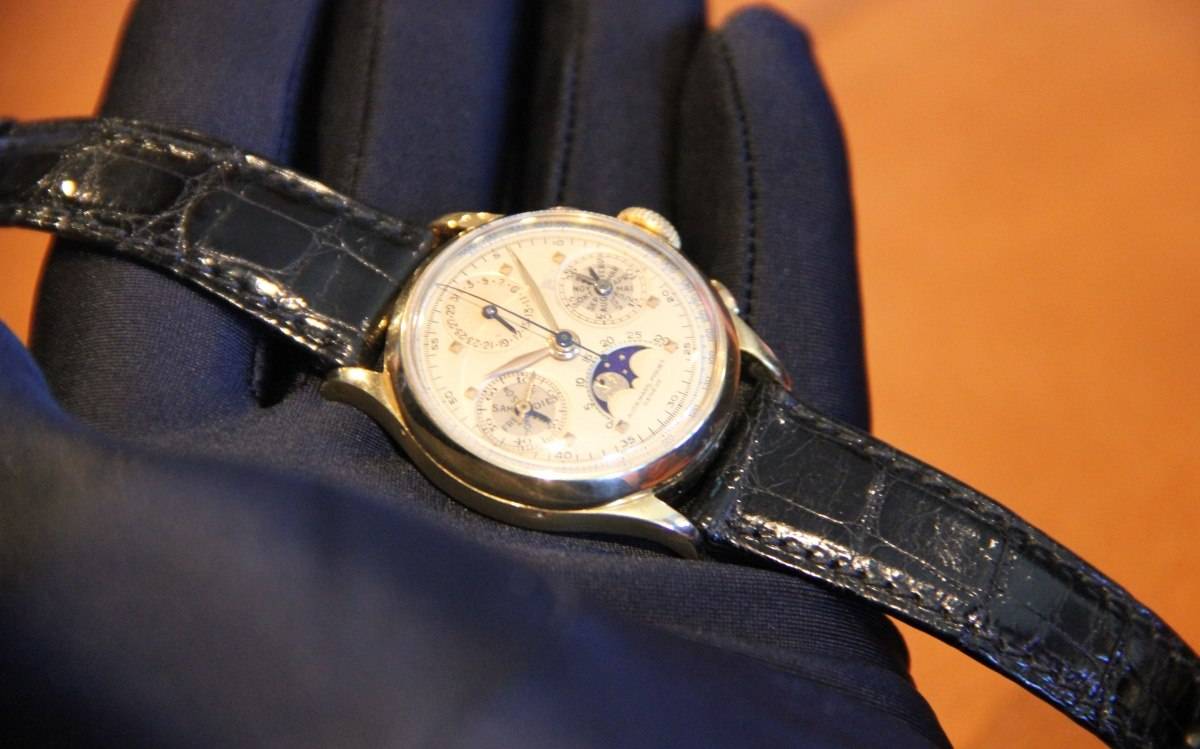 Last, but not least, a platinum, rectangular minute repeating wristwatch, set with sapphire and diamonds, made in 1924 (pictured below). This exceptional piece, featuring an incredibly small 8’’’ minute repeating movement, shows the brand’s prowess in miniaturization. 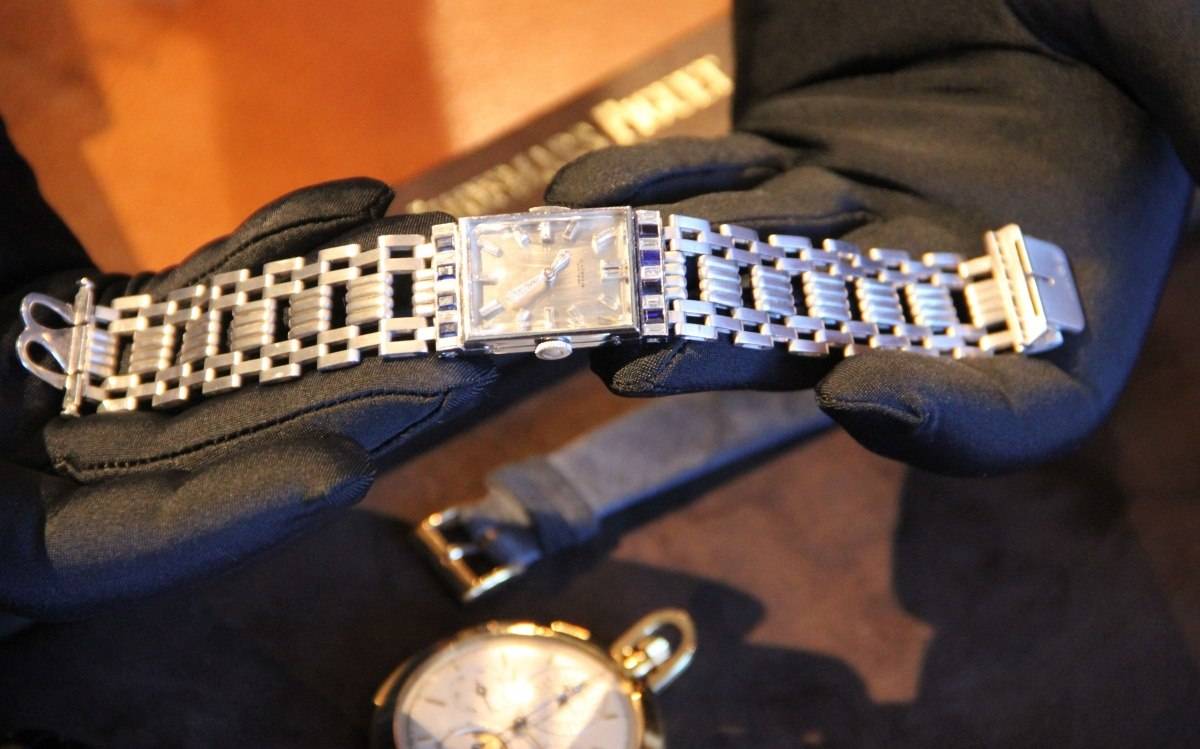 While eyes focused almost exclusively on the timepieces on hand, they also grew in size when shown Audemars Piguet’s library, which holds information of every timepiece ever sold, including the date, reference number, and name of the customer. For obvious reasons, Audemars Piguet continues the bookkeeping tradition today. So if you’re a collector, your name is in ink somewhere in Le Brassus, for as long as the brand exists. 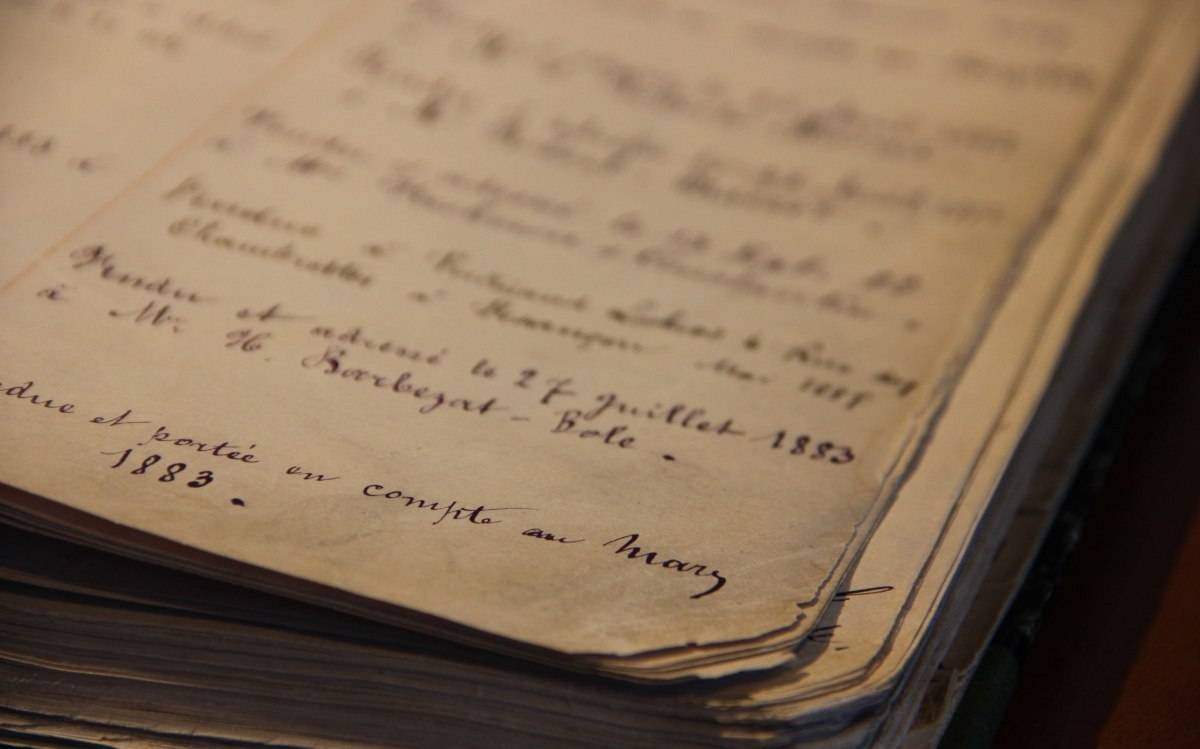 So many reasons why it’s important for watch brands to remember where they come from, and treasure their heritage. The temptation to develop new concepts is certainly there, just as the budget required to do so. In fact, Audemars Piguet has a “Concept” collection (which we will explore later this week). But there’s a reason watch brands protect their identity so closely. The integrity of the product is just as important to collectors as its rarity. 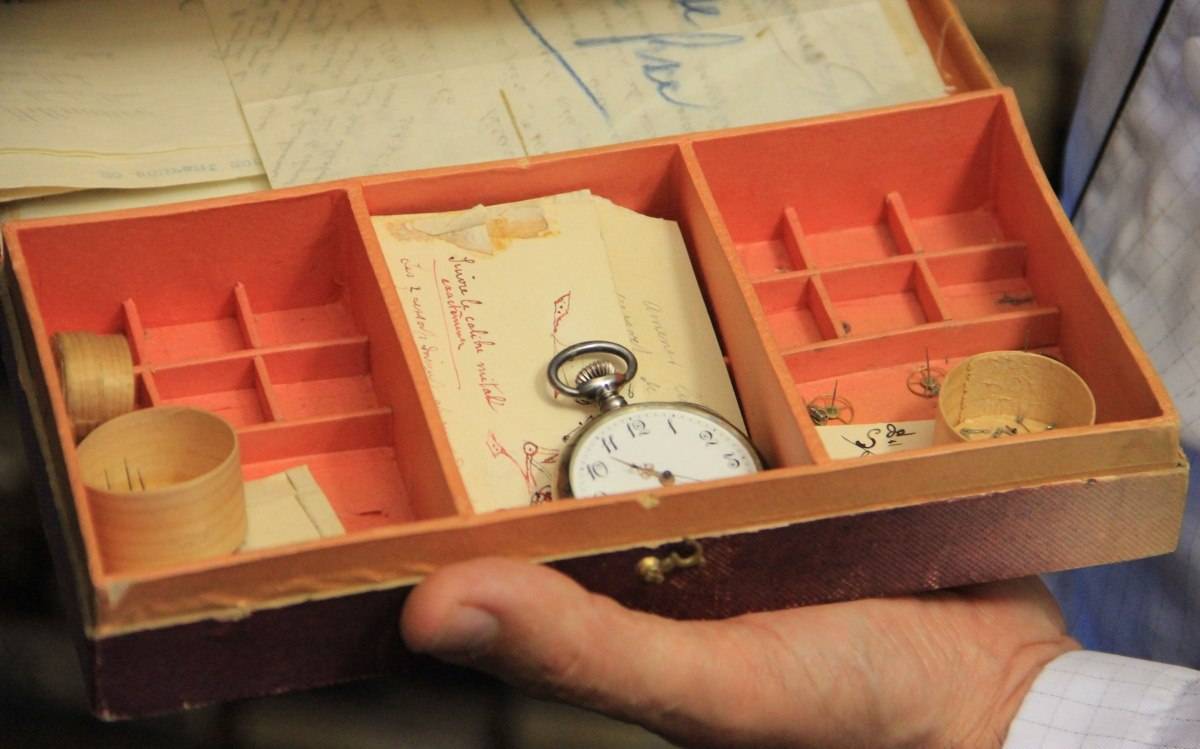 Check in tomorrow to learn more from our trip to the Audemars Piguet manufacture.
Next up: Why young talent is always the way forward.