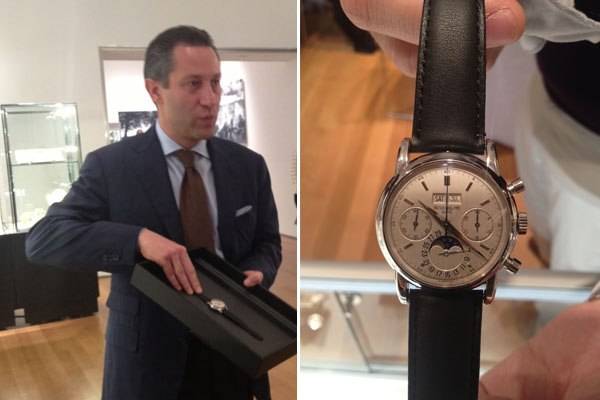 The Patek Philippe 2499/100 in ultra rare platinum from the collection of Eric Clapton was in New York at Christie’s Friday morning before it makes its way to the Four Seasons Hotel des Bergues in Geneva where it will go up for auction on Nov. 12.

Aurel Bacs, International Head of Christie’s Watch Department presented the piece, calling it the “Single most coveted design” in watches, but also went on to explain just how important it is for someone looking to buy this watch.

“For collectors, if you have the five key parameters, which are maker’s name, model, mechanical complexity, condition and aesthetic, and provenance this watch scores a ten out of ten in each category…it pretty much is, the perfect wristwatch.”

Provenance specifically for this piece brings a bit of celebrity to the lot, as it’s owned by Eric Clapton, but according to Bacs, that does not factor into the price. “There are only two in the world,” Bacs said. “In 1989 they chose to sell one of the two in auction, which was to celebrate the 150 anniversary of the firm. The other is still today in the Patek Philippe museum.”

In addition to the 2499/100, two other Patek watches will be up for auction that are considered part of an “all-star” list. These are the J.B. Champion special order platinum observatory wristwatch, and the platinum chronograph wristwatch reference 1579.

See additional photos below of more watches that will go up for auction in Geneva and New York this fall: