No need to scrutinize the condition reports for the collection of Audemars Piguet Royal Oaks set to hit the auction block on May 13 in Geneva. Each of the pieces , which commemorate the iconic model’s 40th anniversary, was sent to the manufacture in Le Brassus to be checked and authenticated. The collection will be included in the Antiquorum sale of Important Modern & Vintage Timepieces at the Hotel Kempinski in Geneva, each packaged with an Audemars Piguet certificate of origin. The entire sale collection will be previewed as part of a traveling exhibition that will stop in New York, Beijing, Shanghai, Hong Kong and Geneva.

Antiquorum has long been a source of collectors’ pieces. Last week, the auction house sold a Patek Philippe Ref. 3974, a platinum minute-repeater and perpetual calendar for an astounding $902,599. In 2002, Antiquorum set the all-time world record for a wristwatch at auction, selling a unique 1939 platinum Patek Philippe World Time Ref. 1415 for $4,026,524  Another record price for a modern watch was achieved in 2004 for the unique white gold Caliber 89, also by Patek Philippe, was sold for $5,002,652. 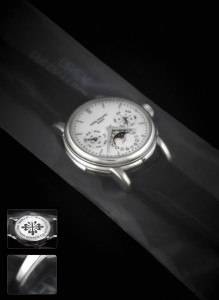